It ain't over till it's over 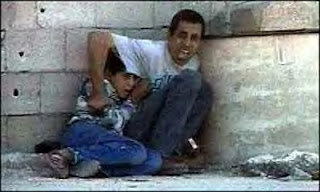 One of the stories that has been poorly covered by the MSM (or should that be one of the many stories?) has been the saga of Mohammed Al-Dura and France2. Yet, this is enormously important in our understanding of the way the media functions and, in particular, the way the Western media reports news from the Middle East.

Mohammed Al-Dura was the little boy whose picture as he was cowering behind his father trying to escape from the bullets of the wicked Israelis back in 2000 was brodcast to all. The report, by France2 informed the world, whose conscience, naturally, was shocked, that the boy was shot dead.

Almost from the very beginning the story was doubted and a court case resulted when France2 and Charles Enderly, its correspondent in Israel, sued Philippe Karsenty of Media Watch that had challenged the story and, above all, the film, for libel.

We wrote about the case here and here. Karsenty lost the case and France2 were not forced to make the uncut rushes public, though the two senior journalists who have seen it, say that there was no footage of the boy’s death. Worse, nobody has ever been able to locate the boy, dead or alive, certainly not under the name of Mohammed Al-Dura.

The case is back in the public eye (though not its conscience) as Karsenty’s appeal against the verdict, whose rightness was disputed by everyone who followed the case in the court, is coming up and a petition is being circulated that urges France II to release those crucial tapes as well as any films they might have of pigs flying.

Richard Landes who has ensured that the case is treated with the seriousness it deserves, gives the text of the petition in French and English on his excellent blog, Augean Stables. Here is another discussion of the story and its significance. For anyone who wants to go through the chronology of the case, Richard Landes helpfully provides one.

If ever a picture was worth many thousands of words (though, to be fair, it also generated many thousands of words) it was that. Little Mohammed became the symbol of the Palestinian martyrdom and the evil that was Israel. Since the pictures of children blown up by suicide/homicide bombers inside Israel were too horrific to be shown, the world had to make do with Mohammed the Martyr.

The idea that the whole episode was staged; that Mohammed was not really Mohammed Al-Dura, was not cowering from Israeli bullets and was not shot naturally discombobulates too many people. Nor does the media particularly want the world and its conscience pay too much attention to the many other cases in which it followed the scenario as set out by Hezobollah. (This may be a good opportunity to remind our readers of the sterling work done by my colleague and a number of his assistants on our forum in uncovering some of the murky doings in Qana last year.)

Should anyone have doubts about the lopsidedness of reporting from the Middle East, let me remind them about the curious lack of interest in the four-month long siege of Nahr al-Bared, a Palestinian refugee camp by the Lebanese army.

Naturally enough, we covered the story here, here, here and mentioned it in other pieces on the situation in Lebanon. (Yes, yes, I promise to do a round-up soon. If nothing else, we need to know if UNIFIL is still alive.)

The siege of the camp is now over. David Pryce-Jones sums up:

After a pretty dismal performance dragged out over these four months, the Lebanese army has finally routed Fatah al-Islam, killed Shakir al-Absi and his deputy, and identified some of the dead terrorists as Saudis and others as men who have fought in Iraq. Between two and three hundred have been killed, about half of them Lebanese soldiers. And meanwhile 40,000 Palestinians have fled from their homes, most probably never to return. Lebanese artillery has turned Nahr al-Bared into the sort of ruin the Russians have made of Grozny in Chechnya.

He may be a little too harsh on the Lebanese army. It is not easy to fight in those circumstances. Even the Russians have not been able to impose total control on the wreck that used to be Grozny and they have been at it for considerably longer than four months.

Mr Pryce-Jones does make the point we have made over and over again, notably in the first part of this posting:

The media is no help, of course, hardly reporting the Nahr al-Bared crisis unless in a paragraph on some inside page. In contrast, just cast your mind back to 2002 when the Israeli army cleared Fatah terrorists from the refugee camp of Jenin on the West Bank. No artillery, no indiscriminate destruction, no 40,000 fleeing for their lives, less than a hundred dead all told, but pretty well every front page and every news bulletin accused Israel of war crimes and atrocities. I particularly remember one Professor Derrick Pounder on behalf of Amnesty speaking of massacre, and proclaiming that the dead under the rubble were too numerous to be counted. The absence of such media professors and human-rights groups from Nahr al-Bared now certifies the whole lot of them as foremost specialists in the double standards underpinning the usual Western representations of the Middle East.

Nobody is going to compare Nahr al-Bared to Stalingrad or any other important battle.

The Palestinians may be perennial victims but some victims are more equal than others. If you want the West to pay attention to what is happening to you, try to ensure that you get under the Israelis' feet. Then it really does not matter that you are treated far better than your brethren in Lebanon or Gaza – the world will know with many advantages of your plight.
Posted by Helen at 01:50