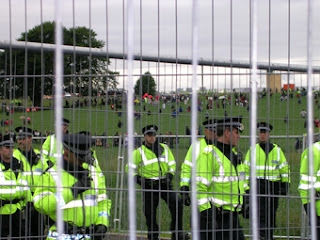 The BBC and others are reporting on a speech yesterday by shadow foreign secretary William Hague, on the familiar theme of "trust" in politics.

Gordon Brown, says young William, "is eroding trust in the political system by rejecting calls for a referendum on the EU treaty". His decision not to hold a poll is a "nakedly cynical" calculation that he can "bulldoze" the treaty into law.

The speech was delivered at the Centre for Policy Studies in London, with Hague declaring that, since becoming prime minister Brown had made it clear he wanted to revive trust in the political process and to involve people in the development of policy. Following his refusal to call a referendum, said Hague, "no-one can have any sensible grounds for believing a political promise from Gordon Brown".

Continuing on this theme, Hague then drew an obvious parallel, stating that, "As Northern Rock has lately shown in a textbook example, every system of human interaction is ultimately based on trust. If that trust goes, the system will break down. The way Gordon Brown has disregarded his promise of a referendum is a dangerous thing for politics as a whole."

However, there is a something of a formulaic ring to Hague's pronouncements. The "trust" theme having been aired last month and again since, it bears the hallmark of an over-rehearsed mantra.

Nor is "trust" actually the issue. No one sensible would trust either politicians or governments and to expect promises to be kept is naïve in the extreme.

What seems to be going on is something different and very much more profound. It is not so much that Brown has not kept his government's promise – it is the contemptuous indifference he is displaying in so blatantly disregarding the promise. There is neither regret nor any attempt to disguise the fact that the people are of no consequence. Mr Brown knows he has the power, and he intends to use it.

The prime minister's attitude is very much "of the moment". Increasingly, we see examples of it in public life – the police picking up drivers for the most minor of infractions, yet evading speeding charges – and worse – when they get caught out.

We see a government enmeshed in the latest foot and mouth crisis, indifferent to the very real economic stress caused by one of its own institutions, and the failure of its own regulatory system. Nothing by way of offers of compensation have been forthcoming and it is unlikely that the many thousands who have suffered real losses will see any recompense.

Whether it be the health service, costing more and delivering less, the education system – ditto – the road system, public transport, pensions, immigration, prisons, crime, taxation … everywhere one gets a sense of decay and inefficiency, yet there is no balancing sense that the "government" or any of the political classes have a grip on any of the issues, or even really care.

That it is not a matter of "trust" would seem to be borne out by the lacklustre performance of the Conservatives in the polls and, more interestingly, the apparent increase in the "don't knows" and those who declare an intention not to vote or refuse to support any of the established parties.

It is not disillusionment either – we are past that. I sense that, more than ever, we look upon the political classes as alien beings, a species apart that exists on this planet but has nothing to do with the affairs of ordinary people. In other words, the government is no longer "our" government, for better or worse. It is populated by "them" and we are "us".

How that will translate into action - if at all - is anyone's guess, but there is a mood in the nation which is not altogether wholesome. We are not a nation at ease with ourselves – and our rulers. Tectonic plates are moving under the surface and, sooner or later, something has to give.

It could well be, therefore, that Brown's contemptuous dismissal of the referendum call is the last straw, although I doubt it. But it is an indicator of how great is the divide. And, in the final analysis, there are more of "us" than there are of "them". Some time soon, we are going to have to remind them of that important fact – and it is going to take more than a few barriers and fluorescent yellow jackets to stop us.