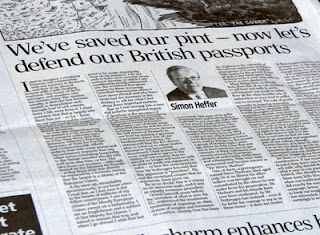 Not content with perpetrating the complete fiction about references to the Queen being removed from the British passport, The Daily Telegraph today awards Simon Heffer pole position on the op-ed page to lock the fantasy into the collective consciousness, his piece headed: "Let's defend our British passports".

One doesn't know whether to be more depressed at this, or at the torrent of thus ill-informed comment attached to the on-line version of the piece, with the majority of contributors taking Heffer at face value and using his rant as a platform from which to sound off about the EU.

It has come to such a pretty pass that one almost feels sympathy for Europe minister Jim Murphy, who has a plaintive little letter, tucked away on the opposite page. With commendable accuracy, he states:

There are no plans to remove any references to the Queen from future passports.

Last year, the European Commission suggested that member states' passports include additional text to remind their nationals, including Britons, that they can seek consular assistance from other member states outside the EU where they have no consular representation of their own.

This proposal has nothing to do with the Reform Treaty. We welcomed the suggestion as a good way to keep British nationals informed.

Now, you can take Murphy and his loathsome government to task for agreeing to the inclusion of the text of Article 20 in the passport (what is wrong with issuing a leaflet when the passport is issued?) but you cannot fault his factual statements.

But such simple facts, and the quest for truth and accuracy are not the fare of Heffer (or The Telegraph). In full "rant mode", Heffer launches into the EU, offering an explanation as to why – as he asserts – there "has not - so far - been an ear-splitting public outcry about the outrageous suggestion that the name of our Sovereign should be removed from the British passport."

Never once does it occur to him, one presumes, that the absence of "public outcry" stems from the rather obvious premise that his "outrageous suggestion" is not true and has no foundation in fact – even if he does concede that it has been "denied by the minister for Europe".

The trouble is that Heffer then extends his argument to include the latest developments in the metric saga. And, although he makes a few good points, he has already lost it, having been moving to the "new and hitherto unexplored region of apoplexy" at the prospect his imagined "atrocity". For goodness sake, "atrocity"?

Even then, amongst his points, it is clear that Heffer does not really understand what is going on – and has not bothered to find out. For sure, the pint has been "saved" – insofar as it applies to bottled milk and draught beer served in pubs (but not bottled beer or mixed drinks like shandy, however served), but the "EU-driven plan to force us to adopt metric measures" has not been abandoned, as he claims.

The substantive change is merely – as we pointed out yesterday – is that the commission intends to propose an indefinite derogation on the use of "supplementary indications", thus allowing (potentially) traders to include Imperial measurements alongside (but with less prominence) the compulsory metric measures.

Yet, in the fevered mind of Heffer, this is, "a victory on an awesome scale". And with that, he then extends his ignorance by conveying the myth that, "our masters have decided they don't care how we sell milk". The boring detail, however, is that the "derogation" on selling milk by the pint applies only to bottled deliveries to the doorstep. Milk in the supermarket, in non-returnable containers, must be marked and sold in metric measures.

But, upon such shaky foundations as Heffer has been able to muster, he thus stakes his claim that, with:

…many more of these "pointless" interferences in our way of life, and much more evidence of our impotence at the hands of the international unelect, and it won't be a referendum on the treaty that we will be calling for. It will be one on whether we want to stay in this oppressive and unsavoury club at all.

This may play to the masses (or Telegraph readers, which is not exactly the same thing) but such a diet of misinformation merely serves to reinforce the arguments that, if the judgement on the treaty is to be based on Heffer-like rants, there is a very good case for not having a referendum.

The stupidity of it all is that there are no end of serious, important issues relating to our membership of the EU, which could be rehearsed with as much bile and venom as Heffer could muster. On a well-founded base, his case would be unanswerable.

But, as it stands, he leaves his case open to being dismissed as an ignorant rant, which indeed it is. He does the cause no favours by so doing.