You can't buck the market 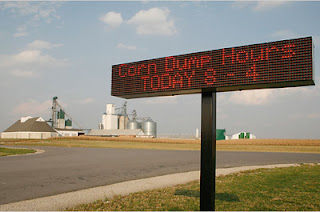 A cautionary tale comes from – of all places – the New York Times. It is offering a tale of woe about a glut of ethanol in the United States, which is having a devastating effect on prices.

Ethanol, as our readers will know, is now being produced in huge quantities Stateside, mainly from corn, after Congress enacted an energy law in 2005 that included a national mandate for the use of renewable fuel in gasoline. In the manner of "lawmakers" who believe they can make a law and everything falls into place, they dictated that the market must consume 7.5 billion gallons of ethanol a year by 2012, compared with 3.5 billion in 2004.

That was enough to get the farmers and distilleries into gear and the NYT illustrates the effect. With the industry already set to produce 7.8 billion gallons by the end of 2007 and 11.5 billion gallons by 2009, Lincolnway Energy (pictured above), a midsize distillery in Iowa, it writes - was once virtually alone in the region. Today, though, competing distilleries are operating and pouring even more ethanol onto the market. 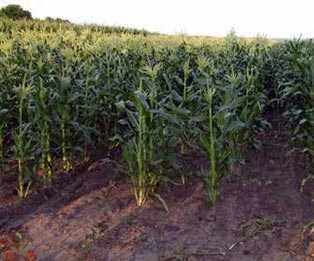 But, while many are speaking of a new "gold rush", the ethanol market has suddenly been plagued by a glut. Guess what. No one thought to invest the huge amount of capital needed to distribute the product. As a result, the average national ethanol price on the spot market has plunged 30 percent since May, with the decline escalating sharply in the last few weeks.

Furthermore, because there has been such huge demand for the corn to make the stuff, the price of this raw material has risen since 2005 from $1.60 a bushel (don't you love these measurements) to $3.27. On the other hand, the price of ethanol on the local market has fallen to $1.55 a gallon from about $2. "The end of the ethanol boom is possibly in sight and may already be here," says Neil E. Harl, an economics professor emeritus at Iowa State University. 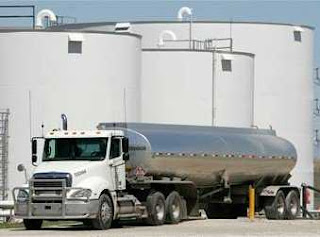 The problem is that, unlike oil, ethanol is corrosive and soaks up water and impurities. It cannot, therefore, be shipped through the country's fuel pipeline network. So it must be transported by train, truck and barge, a more expensive transportation network that is suddenly finding it hard to keep up with the surge in ethanol production.

There is a long backlog in orders for specialised ethanol railway wagons to move the production, many rail terminals at the ethanol plants do not have spurs large enough to accommodate the long trains needed and pumps from the storage tanks to the terminals often do not have sufficient capacity to load trains quickly and efficiently. 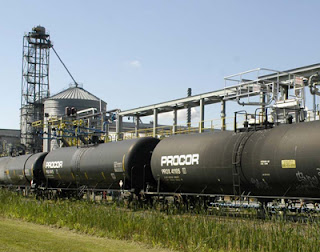 On top of all that, gasoline wholesale marketers have been slow to gear up ethanol blending terminals, in part because they had to invest simultaneously in equipment to manage low sulphur diesel and tougher product specifications, also required by Congress – there's joined-up thinking for you.

Nor can the problems be solved easily or quickly. The backlog in railway wagon orders has grown to 36,166 rail cars by the end of the first quarter in 2007 from about 10,000 in the third quarter of 2005 and, says Chuck Baker, of the railroad construction association, "You just can't scale it up overnight".

Even if this hurdle was overcome, the regulators have not finished. In some southern states like Florida, stiff blending requirements have slowed down adaptation of the distribution system. And so far, only about 1,000 of the 179,000 pumps at gasoline stations around the country offer E-85, a fuel that is 85 percent ethanol and 15 percent gasoline, intended for the five million "flex-fuel" vehicles on the road that can run on high-ethanol blends.

Needless to say, these problems are being seen by the industry as "temporary growing pains", but others are not so sure.

Yet, back in Washington, the Senate has approved a bill that would require gasoline producers to blend 36 billion gallons of ethanol into gasoline by 2022, an increase from the current standard of 7.5 billion gallons by 2012.

And, if the famously "can do" US culture is having these problems, imagine how the European Union is going to cope with a ten percent biofuels quota by 2020.