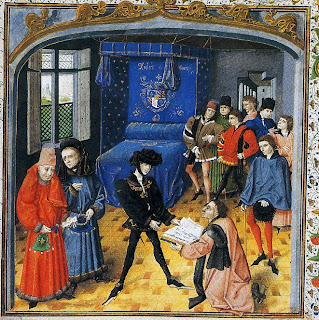 Somewhat belatedly, as one of our forum members has pointed out, the MSM has woken up to the fact that not all is well in the Kingdom of the Belgians, soon, possibly, to become several kingdoms and republics.

In his latest posting Paul Belien, the undoubted expert on the subject, suggests that the immediate break-up of the country may well be followed by further breaks and splinterings with parts of Wallonia possibly rejoining Germany or Luxembourg.

That all sounds very satisfactory to me. I happen to be rather fond of the Duchy of Burgundy and the superlative art it produced. Could that be restored, do you think? After all, the Burgundians never really wanted to be part of France and the Dukes of Burgundy also managed to rule the Low Countries for some time. In fact, the resurrection of the Duchy of Burgundy would really solve everybody’s problem. I imagine there are descendants of both the Valois and the Habsburg Dukes around the place.

There is, however, another Belgian story (what one might call an embarrass de richesses rather than the Burgundian Trés Riches Heures – you have to keep up on this blog) that we have followed and the MSM seems not to have picked up on. That is the story of the non-demonstration that was due to take place tomorrow, on the anniversary of the attacks on the World Trade Centre and the Pentagon.

When we last reported, the demonstration had been banned by the Socialist Mayor of Brussels, Freddy Thielemann, the ban had been upheld by the Council of State and another appeal was lodged with a civil court.

On Friday Brussels Journal reported that

Judge Simon Cardon de Lichtbuer of the Brussels civil court ruled that he does not have the competence to overrule the mayor of Brussels’ banning of an anti-Islamization demonstration planned for next Tuesday, September 11. Consequently, the demonstration remains illegal.

The posting tells the usual sad tale of organizers falling out among themselves and accusing each other of dark deeds and right-wing sympathies with the German Dr Udo Ulfkotte getting particularly hysterical. Just how old is this guy if his “parents and grandparents were responsible for the holocaust” and, anyway, what has that to do with freedom of speech and freedom of assembly? But then, he also seems to believe that Israel fomented the riots in the French banlieux last year. I wonder where the demo organizers found him.

So, unusually, all eyes on Belgium tomorrow.