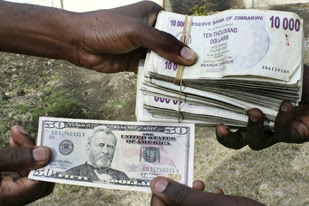 That is the plaintive cry on the site This is Zimbabwe, the opening paragraph reading:

As we enter our seventh year of political turmoil, most Zimbabweans are desperate, despondent, and disempowered. In the face of a total onslaught by their own government, they feel helpless, and many have been made homeless. The economy is stuttering to a halt as social breakdown escalates. Government actions are erratic and oppressive and incapable of solving the chaos they have created. It is hardly surprising that the popular mood has shifted during the past ten months from a guarded expectation of change to a numbing hopelessness.

Such is the desperation that the site talks openly about a desire for external military intervention and, it was only a couple of months ago that Zimbabwe's leading cleric, Pius Ncube, the Archbishop of Bulawayo has called on Britain to invade the country and topple President Robert Mugabe. Then, he was warning that millions were facing death from famine, unable to survive amid inflation believed to have soared to 15,000 percent.

Since then, if anything, the situation has got worse but, such has been the decline in resolve of the British government and its peoples that the call has gone unheeded. As with the French in the Ivory Coast, you can bet that, if French interests were involved, there would be troops from the Foreign Legion already there and Mugabe would be looking for an offshore retirement home.

It comes to a pretty pass, therefore, when – despite the fact that Zimbabwean leaders are subject to a travel ban, as part of a sanctions package agreed by the EU – Mugabe is on the list to be invited to the African Union and European Union summit in Lisbon this December.

But the humiliation is complete when all Gordon Brown is able to do is threaten to boycott the summit in protest, if Mugabe is invited. And such is the "influence" that the UK holds in the EU as a result of its membership that the Lisbon presidency, instead of declaring robustly that Mugabe will be excluded, is offering the wet as dishwater comment that, "no decision has been made on whether to invite the leader of the former British colony."

What is particularly outrageous about all this is that the UK has surrendered the right to take independent action over Zimbabwe in return for an agreed "common position" under the EU's Common Foreign and Security Policy. That is also supposed to bind Britain's "partners", to which extent Gordon Brown has every right to expect solidarity from the likes of Portugal. In its absence, no wonder Mugabe is cock of the roost and his people are crying, "Can anyone help?".

Not the EU and not Britain, it would seem.