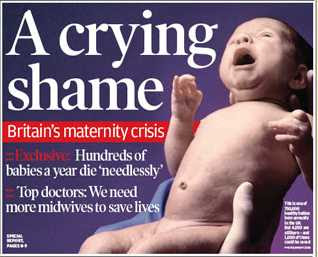 On the eve of the Labour Party conference, the political talk is of nothing else but the prospect of a snap general election – the favoured date being 25 October – when Gordon Brown’s Labour Party would be expected to romp home to a landslide victory.

The likelihood was boosted by a poll in the Telegraph yesterday, which showed that Brown's popularity has remained unaffected by the Northern Rock crisis.

Even the left-wing Guardian is waxing lyrical about Brown’s prospects, telling us that, "Carried forward on calm seas and gentle currents, Gordon Brown will sail into Bournemouth this weekend in the most benign of circumstances….", happily predicting, along with the rest, a staggering Brown victory.

Bizarrely though, via the Sunday Times we learn that Brown "will fight the general election on the issue that he says will be his key priority in office – the future of the National Health Service," the very issue on which Tory leader David Cameron has staked his – and his Party's – reputation.

The bizarre element comes with another article in the same paper which reports, "GPs' generous pay deal costs £1.8bn more than ministers bargained for," an account of the catastrophic miscalculation of the family doctor contracts, leaving people with a poorer service at a staggeringly higher cost.

But what really takes the biscuit is the front page of the Independent on Sunday (pictured) which sets out yet another disastrous outcome of Labour's management of the health service, setting out the details of "Britain's maternity crisis", with too few trained staff, a massive shortage of midwives, and poor resources. This has meant that hundreds of babies are dying needlessly each year and that death rates in childbirth are showing no signs of declining, despite medical advances.

Now, if against that record of dire management, Brown can actually contemplate leading a general election campaign on the Health Service – and still be confident of winning – it would seem that he will be able to take dissatisfaction over the constitutional reform treaty in his stride.

Although, in political terms, the epithet "teflon" is now rather over-worked, it must apply to Brown in spades. And if health issues dominate any election, the EU won't even get a look in. Furthermore, when and if Brown does romp home despite his Party's dire management of the service, he would be forgiven for believing he can walk on water. Under those circumstances, any residual demands for a referendum will be contemptuously brushed aside.

Sadly, therefore, this only confirms our earlier prediction that we that we cannot rely on an election to force the EU referendum issue – but for an entirely different reason. Then, we were suggesting that we would not get an election – on the basis that the EU referendum could become an issue. But, in the present climate, even the traditional aversion to fighting elections with the EU a live issue, this would not be enough to make a difference.

This, it would seem, is a classic, "lose-lose" situation.