It gets better and better 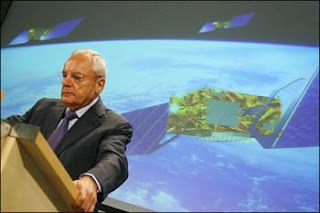 As if the technical woes were not enough, Jacques "Wheel" Barrot's pet little project, the Galileo satellite navigation system, is coming unstuck on the financing – again.

After a bit of typical commission creative accounting, when dear old Jacques proposed to raid the EU budget to find the extra €2.4 billion needed to get the white elephant off the ground, member states are showing a distinct lack of enthusiasm for the idea.

According to AFP, they are particularly unhappy about sliding over €2.2 billion from the CAP account, with Germany in the lead, worried that this could set a dangerous precedent.

Germany, in fact, wants Galileo to be financed by the countries whose companies are building the network, although France is in favour of the commission’s proposal – which is hardly surprising as its companies are the main beneficiaries of any funding. Even then, it seems the French want "new" money, and are not that happy with using CAP funds.

Anyhow, next Tuesday is supposed to be decision day, when Transport ministers from the EU member states are scheduled to give the go-ahead. But, says AFP, "no big decisions are expected given the criticism the proposal has met with so far".

Looking at this debacle, and then confronting the forthcoming EU treaty, you really don't need to look at the detail of the treaty. All you have to note is that anything these goons touch, they screw up. They are not even beginning to get their act together on this one, and they want us to give them more powers?