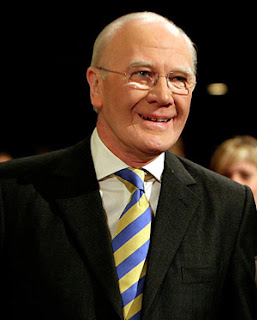 In addition to the BBC, two newspapers have so far responded to Ming Campbell's call for an EU referendum. These are The Guardian and The Daily Mail.

It was the BBC, of course, that broke the story, with an interview on BBC News 24 in which the Lib-Dim leader went for the nuclear option - not just a referendum on the new treaty but a full-blown, "in-or-out" referendum on Britain's membership of the EU. This was because, he averred, the public deserved an "honest debate" on Europe.

"That case has gone by default too often in the past 10 years of this Labour government," he said, so he wanted an "out and out debate" to flush out Eurosceptics on the Conservative benches who had "taken comfort" in that party's call for a vote on the EU treaty.

Such is Sir Menzies’s concern for an "honest debate", though, that he quickly descended to the level of petty name-calling that sours any attempt at such an endeavour, telling the BBC that he was "not prepared to allow [Conservative leader] David Cameron to lead the Europhobes and their allies in sections of the media, to distort the debate on Europe without challenge".

One man's distortion, it seems, is another man's truth, but what is the term "Europhobes" if not a distortion?

Anyhow, the BBC then pulled a response from UKIP leader Nigel Farage who, displaying his usual lack of tactical acuity, "welcomed" Ming's call for an "honest debate" on British membership of the EU. This was heedless of the fact that this is playing to the strengths of the "colleagues" and an argument for which the Eurosceptic community is singularly ill-prepared – not least through UKIP's total inability to get its act together and produce a credible exit strategy.

The Guardian, on the other hand, noting that Campbell had made a "surprise call" for a referendum, as the man had told the Financial Times earlier in the week that a referendum on the new treaty was “not necessary”.

That paper did not bother with Farage and instead retailed accusations of "desperate tactics to paper over splits in his own party", delivered by shadow foreign secretary, William Hague in a classic example of ego self-projection – the Conservatives are so united over this issue.

Interestingly, The Daily Mail took a completely different tack, pronouncing that Campbell, "heaps pressure on Brown by demanding poll on Europe", seeing in it a move that "left the Premier without the key support of Lib-Dem MPs in any vote in Parliament on the issue." That isn't quite the way the others see it but, in the Mail's breast, hope springs eternal. However, we did get one choice quote from Ming. "It's time for the political parties to end the shadow boxing on Europe," he said, as he shadow boxed about the ring, burbling about the EU have given us fifty years of "peace and prosperity".

The final word was left to "a source close to Mr Brown", who said: "This is a bit of a gimmick. We had a referendum on joining the European Union twenty years ago and we are not aware that any serious party is proposing leaving the EU."

They can't even get that right: the referendum was 32 years ago, the European Union didn't exist then – it was the EEC – and the referendum wasn't about joining. We had already done so. It was about whether we should remain in the EEC.

With that sort of misinformation around, little Ming is going to be hard put to hold an "honest debate". But then, if we really did have one, we'd be on our way out of the EU within days – so it is a fair guess that he doesn't want one anyway.