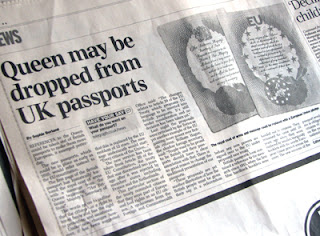 The Yorkshire Post did it on 3 September, running a well-founded and accurate story as its front-page "exclusive".

A week later, The Daily Telegraph has picked it up, embellishing the story beyond peradventure, turning it into a lurid and grossly inaccurate, Queen may be scrapped from UK passports. It then has the gall to publish a pompous and misleading leader, gracing the title, "Passport to nonsense", heedless of the fact that its own story is nonsense. 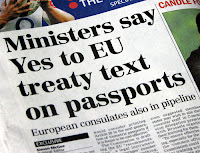 The original story in the Yorkshire Post, of course, was about "contentious plans for a huge expansion of the EU's involvement in representing member states and their people abroad," with the EU commission wanting Article 20 of the treaty to feature in each and every passport to remind people of their rights as "EU citizens". Additionally, there were plans afoot, gradually, to take over the Consular services of the member states.

The source for this was a "green paper" slipped out in November last year, under the deceptive title: "Diplomatic and consular protection of Union citizens in third countries", listed as COM(2006)712 final.

The text and the intent were worrying enough, quite sufficient grounds to raise the alarm as another example of, as we put it, "Another step in the slow process of integration".

But what was entirely missing from the COM was any mention that, as The Telegraph wrongly claims, "the coat of arms are scrapped and replaced by the EU emblem of 12 stars" with the message underneath reading: "Every citizen of the Union".

But, straight from the school of "never let the facts spoil a good story" the paper, using the time-honoured tool of low hackery, relies on the anonymous device of “it has been suggested” using this to imply that the coat of arms will be scrapped.

We then get the intellectually challenged William Hague, in rentaquote mode, "criticising" the proposals "as yet another example of the EU gaining more power over British citizens." He tells the paper:

People want to be proud to be British and their passports should have a clear association with that. There is no good reason to change the traditional presentation of our passports. These proposals are yet another illustration of how the British people must be given their say in a referendum before any new powers are signed over to the EU under a proposed new treaty.

So, one might ask, does it really matter? Surely this is generally beneficial if it raises more public concern about the growing encroachment of the EU on our daily lives?

The answer to that is a simple, blunt "yes" – it does matter. The story is unfounded and demonstrably false. It leaves the door wide open for the government and its Europhile allies to knock it down and then, with absolute authority, dismiss this as another silly "Euro-myth" – typical of how those swivel-eyed loonies and the "right-wing press" get all worked up about nothing.

Lost in the fray is the much more serious and greater threat of the gradual take-over of our Consular Service which, in the fullness of time, may turn into EU embassies, and all for the sake of a quick, cheap headline.

Yet, already the story is flashing though the net, to be picked up and regurgitated by gullible Eurosceptics. Thus they demonstrate only that, after all these years, they have learned nothing, and continue scoring "own goals" with gay abandon.