A hundred days and counting… 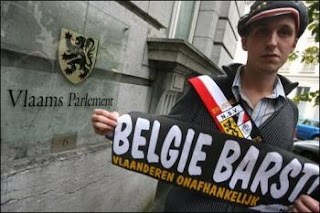 Considering how many British journalists there are in Brussels, you would think that the political crisis in that benighted country might get a little more attention.

But, in the wake of Booker last week, the Observer has picked up that there is something amiss.

In an a piece headed, "Belgium divided as Flanders pushes for a messy divorce", Alex Duval Smith heads off to Rhode Saint Genese in Flanders – nine miles south of Brussels - to interview the mayor Myriam Delacroix-Rolin, in anticipation of the coming Tuesday when Belgium marks its first 100 days without a government.

Smith suggests that the Belgians, and the rest of us, will have to get used to it and asks how will the divorce of Flanders and Wallonia be consummated, and what will become of Brussels, home to the EU and Nato? More worryingly, he writes, the demise of Belgium - a sticking plaster over the fault line between Europe's Protestant north and Catholic south - could make Europe a more dangerous place.

Delacroix-Rolin speaks of a linguistic divide, with the Flemish-speakers gradually colonising her village and dominating local politics and administration, driving out the French-speaking Wallonians. "One way or another", she says, "your route is barred unless you have Dutch language diplomas." Meanwhile, the agency AFP is reporting that Albert II, King of the Belgians, has stepped up efforts for a solution, meeting Belgium's political heavyweights in a series of talks at his Belvedere residence. Crucially, though, he is excluding the Vlaams Belang, the Flemish-based party which is the main driver of secession.

Thus, however much the "bigwigs" talk, the Flemish community - which accounts for 60 percent of Belgium's 10.5 million people – is not giving ground and the French-speaking Wallonian are not prepared to accept total Flemish dominance in order to save the federal government.

Even AFP admits, therefore, that what was once just hypothetical - talk of Belgium falling apart - is now on everyone's lips. But what no-one seems to be confronting is the issue raised last week by Booker that, without a government, Belgium cannot sign the new constitutional reform treaty – due to be presented in December. And there is no one currently who believes that the constitutional crisis will be solved by then.

We live in interesting times.