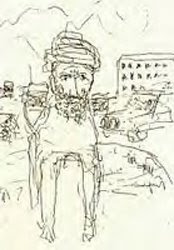 A couple of weeks ago we wrote about another outburst of Islamic Rage, this time because a Swedish cartoonist had drawn Mohammed's face on the body of a dog. I said at the time that I did not actually find the cartoon particularly amusing or interesting but that is neither here nor there. I do not think Sir Salman Rushdie is a particularly good writer or a deserving recipient of a knighthood. (Actually, I have serious reservations about writers receiving honours and agree with Rudyard Kipling on the subject. He accepted the Nobel Prize for literature and honorary degrees but consistently refused all state honours, even when the King himself approached him.)

These days you can have different kinds of honour – a fatwa and a bounty on your head because your writings or your cartoons have offended somebody. Well, actually, not somebody. I have heard of no death threats emanating from Buddhists, Jehovah’s Witnesses or, for that matter, Jews or Christians in general. But there is the Islamic Rage.

As Flemming Rose, editor of Jyllands-Posten, who knows a thing or two about that Rage, posts:

Abu Omar al-Baghdadi, the alleged leader of Al Qaeda in Iraq, has put a bounty of 100.000 dollars on the head of Swedish artist Lars Vilks, who made a drawing of the prophet Mohammed as a dog. The threat was broadcasted in a 30 minute taped speech.

Gives you a kind of status, that does and ensures that more people publish the cartoon, whether they like it or not.

Lars Vilks seems to have behaved in a very stiff-upper-lippish sort of way, making jokes and calling on moderate Muslims to come out in his support.

An updated blog tells us that the cartoonist has now been forced to go into hiding:

Swedish artist Lars Vilks was forced to go into hiding on Monday after receiving death threats from the leader of Al Qaeda in Iraq. Swedish police searched Vilks’s house for explosives before he was allowed to pick up a few items, leave his home and move to an unknown location.

He seems not to have given up on public appearance, which is rather reassuring, as is the fact that there are extraordinarily courageous Muslims out there who are defying the Rage merchants in the name of freedom of speech:

Vilks returned to Sweden Sunday after having taught a class of art students in Kassel, Germany. Today he is going to appear on a panel in Stockholm debating Islam and secular society, where he won’t be the only one onstage with a bounty on his head. Mina Ahadi, leader of the Council of ex-Muslims in Germany, is also under police protection due to several threats to her life after she dared to publicly break with Islam and declare herself an non-believer. Ahadi, a refugee from Iran, is on the front lines in the European debate about freedom of religion - particularly the right to say no to religion.

The Swedish Prime Minister is distancing himself from the entire problem, talking about freedom of speech and the need for dialogue. A dialogue, of course, involves two sides at least.
Posted by Helen at 19:13