How to be Topp in Politics 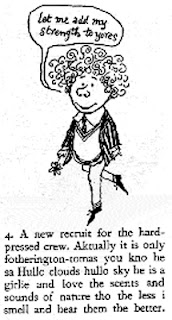 There is only so much swearing one can do about the Conservative Party and its denizens before one runs out of words. Where is that fabled Australian cricket captain who was supposed to have sworn in the changing room continuously for fifteen minutes without once repeating himself?

Those were the thoughts running through my head as I contemplated the possibility of reading yet another speech by the Boy-King on why he wants to measure “General Well-Being” (whoever he may be) and trying to work out what the Goldsmith-Gummer team may or may not have produced by way of policies.

We have left Madeleine Bassett behind. We are now with fotherington-tomas, described by Molesworth thus:

There is no better xsample of a goody-goody than fotherington-tomas in the world in space. You kno he is the one who sa Hullo Clouds Hullo Sky and skip along like a girly. i mean you are just zooming about taking pot shots at various new bugs with your catapult when fotherinton-tomas sa Do you think you should be doing that, molesworth, is it kind. Can you not hear the shrieks of agony?

There is a great deal more about fotherington-tomas “who is a wet and a sissy” in the great works about Molesworth by Geoffrey Willans and Ronald Searle. Indeed, both Molesworth (or molesworth, if one is a purist) and fotherington-tomas have their own wikipedia entries, which seem fairly accurate. (Chizz, chizz, I must stop reading that book and get on with blogging.)

Anyway, the point is, does fotherington-tomas not remind you of both Cameron and Goldsmith Minor? Do they not all go around skipping like girlies and saying things like Hullo Clouds Hullo Sky Hullo Glacier? Let me add that no girly of my acquaintance does anything so daft.

I understand Goldsmith Minor has been talking of putting green taxes on shops (those dreaded supermarkets) not the consumers. Yeah, right. And the shops will get the money from where? Besides, when it comes to carbon footprints (as moronic an idea as anyone has ever heard) where do we put farmers’ markets (of which I am a fan because the food is good)? Thirty farmers all heading in one direction and another three to five hundred customers in cars also heading in that direction? Hmmm.

His other idea is to reduce stamp duty on homes that have complied with some green ideas, presumably whether they are sensible or not. It seems that little Zac does not know that stamp duty is paid by the buyer not the seller. In actual fact, stamp duty should either be abolished or raised to levels of property prices that would affect next to nobody.

That would leave people who buy property with enough spare cash to put in heat insulation, which is actually a very good idea as any fule kno. Whoops, sorry, but it is difficult to get away from that brilliant analysis of the Conservative Party.

What of General Well-Being and his subordinates Colonel Happy-as-Larry and Major Upheaval? What exactly does fotherington-tomas the Boy-King of the Conservative Party think he is doing prattling on about how he is going to provide all manner of folk with happiness and well-being?

What politicians need to concern themselves with is specific problems. It is fair to say that the state of our public transport makes us all rather unhappy and lowers General Well-Being in the estimation of his troops. Fine. The problem is public transport and what is to be done about it. Tax the hell out of domestic flights is not the answer. Could there be others? Should the Conservative leadership look at papers produced on the subject by numerous think-tanks or ask for new ones, then come up with some ideas?

Or what of litter, yobbish behaviour, rising crime, blah-blah-blah? All of that makes us distinctly unhappy. Do we have any ideas on, speaking randomly, better clear-up of litter in public places, recidivism among criminals in this country, the problem of people who ought to be in mental health institutions and not in prison, the difficulties children in care face when at the age of 16 they are told to get on with life?

There are many other problems around and none so bad that politicians cannot make them worse. But, perhaps, instead of skipping around like a girly and worrying about shrieks of agony in new bugs, the leader of the Conservative Party and his delightful friends should turn their attention to those very real problems and start coming up with some radical ideas. And for goodness sake, stop worrying about our happiness. Just butt out of our lives.