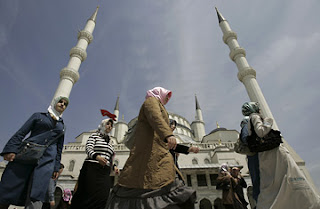 It is good to know that there are open debates about constitutional changes somewhere almost in Europe. Of course, the debates are in Turkey, a country that is unlikely ever to become part of the European Union, which is probably just as well. They might be shocked by the way matters are swept under the carpet here.

Chinaview reports that the AKP working group that has been discussing a reform to the constitution, which is not the original one set up by Mustafa Kemal Atatürk, but one that was brought in during a military coup in 1980, has failed to reach agreement on a number of issues.

The lawmakers and academicians of the AKP working group have agreed on maintaining the first articles of existing constitution covering the form of the state and characteristics of the republic, integrity of the state, official language, flag, national anthem, and capital as well as irrevocable provisions.

But they failed to reach a consensus on a formula, showing disputes for the amendment of the constitution, with the headscarf issue became the main obstacle, according to media reports.

In fact, both formulations abolish the ban on headscarves in higher education but there is an interesting difference in the wording.

The first formula holds that nobody can be banned from her right to high education due to her dress, while the second one says there will be no dress code in the universities.

According to the current dress code, headscarf is not allowed in state offices and universities.

In this light, AKP prominent names are searching for a formula which will open the doors of universities to students wearing headscarf, while preventing robe, turban and black chuddar with the new constitution.

The Prime Minister insists that the constitution will not be reformed without extensive debates in the parliament, where the AKP has a majority. With an AKP President, the chances of the new constitutional provisions being stopped are slim.

Worries are already being expressed, as Al-Jazeera reports:

University rectors and the head of Turkey's court of appeals both warned on Wednesday against any change in this regulation.

The head of Turkey's Higher Education Board - a well-known secularist law scholar - condemned Erdogan's move to lift the headscarf ban.

Erdogan Tezic said: "It is our mission to remind the public that any constitutional regulation that would abolish restrictions on clothing is illegal."

Ayse Ayata, a professor at Ankara's Middle East Technical University, said: "The lifting of the ban could lead to increased community pressure on uncovered women to cover up."

Arguments are being made that the new constitution will give the government and parliament too much power and upset the balance between institutions. Furthermore, the main opposition party is unhappy “that the government inform the EU about constitutional amendment before it is discussed at home in Turkey”. [sic] Well, they had better get used to it.