This is very sad 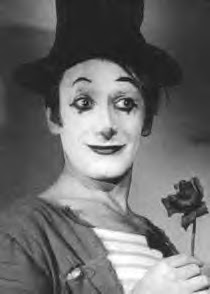 The passing of a great man has to be marked and Marcel Marceau, the great French mime, whose death has just been announced, was a very great man and a very great artist, who managed to present an extraordinarily wide range of emotions and characters without once uttering a word.

Well, not on stage, anyhow. He did speak once in a film, Mel Brooks's "Silent Movie". Marceau had the only speaking part, famously pronouncing the word "Non". Perhaps, he was thinking of General de Gaulle.

The obituary tells us something about Marceau's background and early life as a French Jew:

Marceau was born Marcel Mangel on March 22, 1923, in Strasbourg, France. His father Charles, a butcher who sang baritone, introduced his son to the world of music and theater at an early age. The boy adored the silent film stars of the era: Chaplin, Buster Keaton and the Marx brothers.

When the Germans marched into eastern France, he and his family were given just hours to pack their bags. He fled to southwest France and changed his last name to Marceau to hide his Jewish origins.

With his brother Alain, Marceau became active in the French Resistance. Marceau altered children's identity cards, changing their birth dates to trick the Germans into thinking they were too young to be deported. Because he spoke English, he was recruited to be a liaison officer with Gen. George S. Patton's army.

In 1944, Marceau's father was sent to Auschwitz, where he died.

Some explanation there for this astonishing performer's art.
Posted by Helen at 18:44