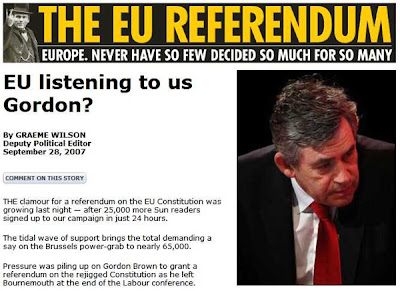 Full marks to The Sun again, for stoking up the EU referendum issue, its latest piece rehearsing the well-worn but entirely apposite theme of Brown refusing to listen.

To counter this, the newspaper claims that the "clamour" for a referendum "was growing last night … after 25,000 more Sun readers signed up to our campaign in just 24 hours." This "tidal wave of support" it says, "brings the total demanding a say on the Brussels power-grab to nearly 65,000."

Then while Brown and Miliband are trying to ignore the calls, "angry Labour MPs and trade union bosses warned them last night that they cannot ignore the calls for a vote. They are planning a council of war within the next two weeks to decide how to force Mr Brown to think again."

It says something that the paper has been able to galvanise more support in a few days than the Eurosceptic movement has been able to mobilise in decades, but – without in the least bit wishing to look a gift horse in the mouth – one wonders how real it is.

Brown has been able to face down newspaper campaigns before, and with each of the newspapers and groupescules doing their own things, there is nothing of a sense of national unity behind The Sun. This is, after all, a Sun campaign, another step in the long haul, where successive groups, from Open Europe to the Tory Party have all attempted to "own" the referendum, their real agenda being self-promotion.

And, just as quickly as they can pick up something, these groups can get bored with the issue, moving on to pastures fresh, whence their rhetoric becomes as stale as er… yesterday's Sun.

The test will probably come when Parliament resumes. Then we will see if there is really any political heat, or whether domestic politics and election fever take over, and the calls for a referendum are swamped.

There is also the possibility that Brown has a few side deals in the wings, with the "colleagues", staging a few high-profile theatrics at the IGC, all carefully calculated to give the impression that he is looking after "Britain's interest".

Certainly, the "colleagues" have far too much invested in this treaty to let a mere newspaper push them off course and they will be urging Brown to hold his nerve – and giving him every opportunity to shine on the domestic front.

This all makes for very strange politics, where even the most experienced "insiders" are finding it difficult to read the runes. More than ever, ordinary people are simply spectators on the sidelines, while the drama plays itself out, dictated by issues beyond their control and understanding.

But, deep down – in fact, not so deep – there is this niggle. Is this all real? What really is going on? For once, the political compasses are not really working, the pundits are all over the place and all the certainties have gone. "Uncharted waters" doesn't even begin to describe it.