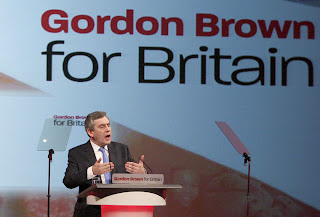 The rules on this blog change every time I turn round and I have some difficulty in keeping up. However, it would appear that if I want to write a more general rant about politics or lack of it in modern British life, I have to put it on Umbrella 3, which is what I have done.

Click here and you can read, should you wish to, a discussion of Gordon Brown's seriously unimpressive speech to the Labour Party Conference, his first as this country's Prime Minister.

Still, there is nothing new about unimpressive politicians. As if to remind us of this fact, yesterday also saw the most nauseatingly obsequious obituaries of Lord Gilmour of Craigmillar, a man highly regarded for some reason, who was wrong on almost everything. There was one exception - it's on the blog.