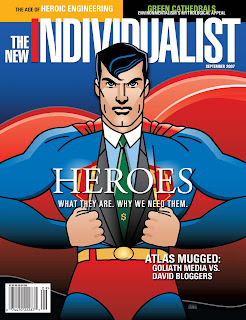 Honestly, I have read Ayn Rand. And agree with most of her ideas. It's just there aren't all that many of them. You read one essay and you agree; you read another one and you still agree; on the third and fourth you find yourself saying: "hey, I've read that and agreed with it already". And that, I am afraid, is that.

Still, there is a good piece on The Atlas Society, called "Atlas Mugged" (geddit?) about the gradual ossification of the main-stream media and the irruption into it of the blogosphere. It concentrates on the United States, mentioning only 18 Doughty Street in a country called England (do they know something we don't?) but the general outline is correct.

There is, of course, the additional problem in Britain and, presumably, that is a sign of different attitudes, of the MSM trying to take over the blogosphere through "clogging", that is, journalist supposedly blogging on their media site.

Of course, they cannot take over but they can and do undermine us by pretending to be bloggers and being treated as such. In other words, this is a blatant attempt to enclose blogging inside the big tent of the MSM. I suspect it will fail.
Posted by Helen at 19:28