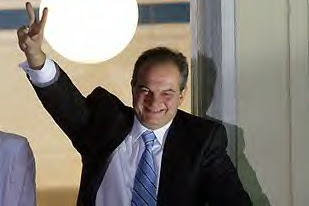 The first of this autumn’s elections has been and gone with little change except for the fact that the Greek government now has a smaller majority than it did before Prime Minister Karamanlis dissolved the parliament. What happened in the meantime were the catastrophic fires and the perception of government incompetence in dealing with them.

We have written about the fires before and pointed out that the problem had much to do with the lack of investment in the fire services in a country where summer forest fires are not exactly unusual. This lack of investment goes back a long way.

The BBC has a prettily coloured chart to show the way the parties have taken their seats. New Democracy has 152, the Socialist Pasok 102 and the three smaller parties have gained support. The two Communist parties, KKE and Syriza will have 22 and 14 seats respectively with the right-wing nationalist Laos holding 10 seats. This is the first time a far-right party has entered parliament since the ending of military rule ended in 1974.

That gives the government a majority of 4 over the combined opposition and the one thing that is likely to combine them is any hint of free-market reforms. It is hard to tell at this stage what these will consist of. The BBC summary, based on Prime Minister Karamanlis’s promises is a little contradictory:

Mr Karamanlis has pledged to use his new four-year term to improve the economy, fight poverty, raise pensions and create a social state for the future.

And no doubt, he will support motherhood and bake the best apple pies in history.

Some of the necessary reforms have probably bitten the dust, as Al-Jazeera reports that

The embattled education minister, Marietta Giannakou, who led planned changes in the education system that sparked months-long demonstrations, failed to retain her seat in parliament.

There is pressure on the leader of Pasok, George Papandreou (very confusing, this hereditary style of politics, as I keep thinking he is his father, Andreas) to resign because he has now lost two elections.