What are we supposed to do? 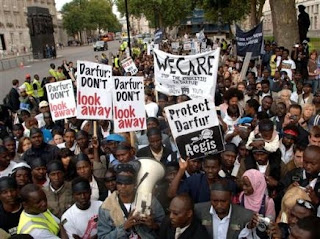 Yesterday, in case you did not know, was "Global Day for Darfur", with events taking place worldwide aimed at raising awareness of the killings in the Sudanese region. About 30 other countries supported the initiative, and there was a small demonstration outside Downing Street in London with banners pleading for the world community not to look away.

Yet, a settlement in this region was supposed to have been a triumph for Gordon Brown and the international community, the UN having agreed in August to commit 26,000 troops and police to humanitarian tasks.

Blighted by grand rhetoric from EU member states but very little action - with a handful of British officers now being sent - the UN agreement has provoked a comment from the Herald's defence correspondent, Ian Bruce.

The planned UN "peacekeeping" force, he writes, "is destined to fail before it even arrives. The inclusion of a handful of Western logistics experts and British officers with command experience means nothing when the bulk of the force is to be drawn from poorly trained, ill-disciplined and resource-starved African Union armies." He continues:

Some of the African Union troops from 26 states - already there in penny packets scattered across an area almost as big as France - have become part of the problem rather than the solution, with frequent accusations of looting and rape all too common. Like the UN fiascos in Rwanda and the Balkans, the decision to commit soldiers to Darfur is gesture politics - too little and far too late.

While the UN grandly decrees the assembly of almost 20,000 soldiers and 6000 police officers for the task, the devil is in the detail of how the force will be made up and what authority it will be able to wield. There are already 7000 African Union soldiers in Darfur.

They have been there for three years and have not prevented a single massacre or dented the capability of the Janjaweed militias preying on local civilians. Part of the problem is the UN remit. Like the Blue Helmets in Bosnia, UN troops are not empowered to take the fight to the predators. They have the right to respond to aggression only if it is aimed specifically at them or at refugees under their immediate care.

With 26,000 men to cover an area of almost 200,000 square miles, the chances of having enough troops in the right place at the right time is remote. More to the point, to avoid annoying the Sudanese, the "peacekeepers" have no authority to disarm militias.

In other words, it is more of the same – empty gestures. Adequately to police the area would probably require (to pluck a figure from the air) 100,000 European troops, with a high level of mobility and support, including helicopters, transport and attack aircraft. In round figures, that would cost in the order of £3-5 billion a year for as long as they were deployed.