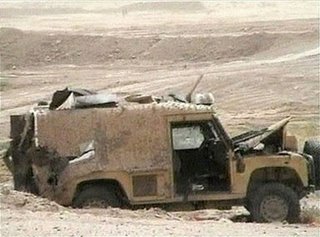 Not on the scale of the loss of the Nimrod over the weekend, another sad event occurred today with the death of two British troops in Iraq, and the serious injury of another, following a roadside bomb attack on their "Snatch" Land Rover, just north of Basra. A fourth soldier was lightly wounded.

A report from Middle East online describes how "insurgents" attacked a British army unit escorting a reconstruction team. They were tasked to escort a reconstruction unit to assist with the rebuilding of the area north of Basra.

The "Snatch" Land Rover was badly damaged, with the wreckage of the vehicle standing upright by the side of the road, part of the rear cabin ripped open by the force of the explosion.

This brings the total number of UK soldiers killed in operations in Iraq since the 2003 conflict to 117 and, by our reckoning, the number killed while patrolling or travelling in lightly armoured or unarmoured Land Rovers to 25 – the largest single group of casualties in the Iraq theatre.

This follows the story in the Scotland on Sunday last week, which revealed that the MoD had sold off 14 Mamba armoured vehicles for a fraction of their original cost.

That story was picked up yesterday by the Mail on Sunday and again by the Scotland on Sunday, based in information supplied by this blog.

Today, however, prime minister Tony Blair described the deaths as a "terrible tragedy". He should, perhaps, have a quiet chat with his defence procurement minister, Lord Drayson, who consistently maintained that the "Snatch" Land Rovers "provide us with the mobility and level of protection that we need".

It was only after a sustained campaign by this blog, backed by Conservative shadow ministers, Booker in The Sunday Telegraph, and then the Sunday Times, that Drayson eventually conceded that new armoured vehicles should be bought.

But, since these cannot be delivered to theatre until the end of this year, our troops must continue to ride – and die – in inadequately protected Land Rovers, and Blair has the nerve to call these deaths a "terrible tragedy". Criminal incompetence by his own government would be a better description.