Why on earth should he resign? 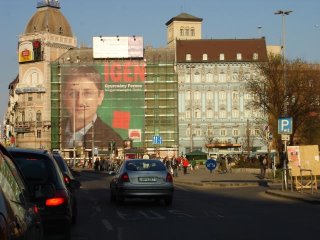 No, I am not talking about the Pope, who cannot resign, anyway and who is being threatened by far worse things by the peace-loving Islamists with the support of almost the entire MSM (dead tree and electronic). The chap in question is the Hungarian Prime Minister, who has been caught out by somebody in his own party who leaked a tape of the man’s speech to the media.

In April of this year, the Socialist Party broke the “curse” on political parties in Hungary, under which none had won two elections in a row since the establishment of a democratic system in 1989.

On May 26, Ference Gyurcsány, the less than totally popular Prime Minister made a curious speech at a closed meeting of the party. His comments, freely larded with obscenities, centred on the somewhat unsurprising fact that he and his government had lied to the people of the country about the economic situation and the need for reforms.

“"We lied in the morning, we lied in the evening," he said in a speech that was littered with obscenities, and referred to his own administration as "boneheaded".”

Somebody leaked the tape to the news media. A brief excerpt was broadcast on the state radio on Sunday and longer ones on various news websites. Upon this, there was a demonstration outside the Parliament building and calls for Mr Gyurcsány’s resignation.

While admitting that he did say all of that and yes, there has been a “deluge of lies” covering the country in the last few years, that was not a reason for him to resign. How right he is. If politicians started resigning for telling lies to the electorate, there would be precious few of them left in any position. Hmmm. Something to think about.

The BBC World Service has thoughtfully provided several excerpts from the speech:

“"There is not much choice. There is not, because we screwed up. Not a little, a lot. No European country has done something as boneheaded as we have.

"Evidently, we lied throughout the last year-and-a-half, two years. It was totally clear that what we are saying is not true.

"You cannot quote any significant government measure we can be proud of, other than at the end we managed to bring the government back from the brink. Nothing. If we have to give account to the country about what we did for four years, then what do we say?"”

It is entirely possible that the Prime Minister himself authorized the leak, in the hopes that harsh words will make harsh reform more acceptable. In this, he may well have been a little too clever (going round those revolving doors twice and ending up on the wrong side again perhaps).
Local elections are due on October 1 and they may well go against the Socialists. Furthermore, as Al-Jazeera reports:

“Student leaders have pledged to mass 10,000 people on the streets of Budapest this week, while trade unions said they would take action in October.”

Mr Gyurcsány cannot have forgotten the anniversary that is coming up this October. It is fifty years since the Hungarian Revolution, which was triggered off by a huge demonstration in which students, academics, trade unionists, all merged. I am not saying that history repeats itself. It never does, not exactly. But hubris is usually followed by nemesis.