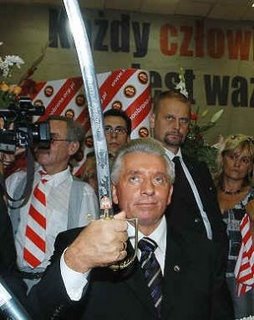 Having sacked his deputy prime minister Andrzej Lepper (pictured), he of the left-wing "populist" Self-Defence party, Poland's prime minister Jaroslaw Kaczynski, of the Law and Justice party, is now 53 votes short of a working majority.

Unless he can stitch together a new coalition, the government will have to be dissolved, with the prospect of fresh elections in November.

It appears that the major stresses between the coalition partners have arisen over the budget and the decision to send 1,000 extra Polish soldiers to Afghanistan.

The Beatroot has an interesting "take" on this, but also read his latest post (and the comments).