What to do about Darfur? 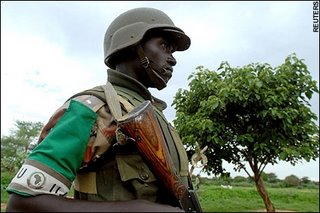 Altogether, since we started this blog in April 2004, we have written 38 posts on Darfur – to be more accurate, that many posts in which we have made reference to that benighted land. And the constant theme has been that the situation was bound to end in tragedy once again. That indeed is happening.

Whatever else could or could not have been done, as late as the end of March this year, I was writing that: "The one thing of which you can be sure - despite the bleating from the EU and its pretensions of being a 'world power', it will do precisely nothing."

Actually, I was wrong – the one thing the EU will do is continue bleating, another example of which we saw yesterday with the IHT reporting that the EU had "strongly condemned" the violation of a cease-fire by Sudanese government and rebel groups in Darfur and "expressed alarm" at the renewed fighting in the region.

This was in a statement from the Finnish presidency which went on to declare that the EU was deeply concerned by "the further deterioration of the security and humanitarian situation in the region." It went on to say that it – the presidency – "condemns this continuing violation of the cease-fire, particularly the violence directed at the civilian population and providers of humanitarian assistance," then urging all parties "to respect human rights and allow deliveries of humanitarian aid".

The same day, United Nations' refugee chief Antonio Guterres warned that the worsening violence in Darfur was threatening the whole region. According to the BBC website and others, he is predicting a “humanitarian catastrophe” if the security situation does not improve. The day before, UN SecGen Kofi was issuing similar warnings, saying that three million lives are at risk.

Yet, earlier this week, the Telegraph’s David Blair was explaining why absolutely nothing constructive would be done by either the EU or the UN about the impending genocide.

What was interesting about this article, posted on the web, was the die range of comments which, amongst other things castigated Blair for not mentioning the "elephant in the room", the malign role of China. But most interesting all was a comment from Alexander Hugh, who stated:

The First World (African countries are in no position to help themselves) has a choice. Either collectively we make grand but futile statements and draw up meaningless plans through an increasingly impotent United Nations, and accept that in reality the wars will continue. A second option is to accept that African countries will one day emerge from the disasters of today's wars, but that it will take time, and in the meantime use targeted sanctions to attack the corrupt and evil leaders that are responsible for most of the mess.

In the absence of any commitment to send troops to sort out the Sudanese government, the second option looks as good an answer as any to the question we posed: "What to do about Darfur?"

One thing for sure, thought, these "grand but futile statements" are more than a little wearisome. They may make their originators feel important, but they convince no one and simply add to the utter contempt we all have for them all.