Even the bureaucrats are complaining… 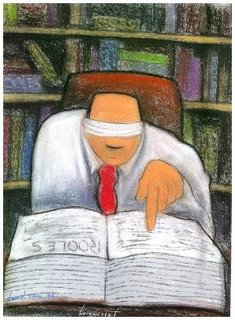 That is the plaint from none other than EU commissioner Günter Verheugen, the so-called "European enterprise commissioner". And my heart bleeds for him – or at least it would if I could stop sniggering long enough.

His sorry tale of woe is recorded in Eupolitix where he at one calls for the EU to "repatriate researchers" and then declares that "less research bureaucracy is needed" if that is to happen.

I toyed with a career in academia once, after I had completed my PhD and was even offered a research/teaching post. But I had already spent years alongside my supervisor – a gifted and imaginative scientist – watching him spend most of his days processing forms and more forms, and attending meetings about processing forms, all to attract the meagre research funding that would keep his department functioning – and most often failing. And the bureaucracy – mind-sapping enough normally – was never more complex than when EU funding was involved.

To be a senior academic these days is to be a bureaucrat and it is no wonder that the people who are really interested in research for its own sake steer clear of the academic scene. They either go into industry or – what is worrying Verhuegen – depart for more liberal (and better paid) climes, such as the United States.

We see this reflected in the starkness of the figures. Europe produces more PhD science graduates than the US but has fewer people working in research than America or Japan – five per 1000 compared to nine per 1000 in the US and ten in Japan.

And there is a real economic penalty, as Verheugen readily appreciates. "This is an issue we have to get to grips with," he says. "We have no objections if people who did their training in Europe go elsewhere. But we have to pay the costs, what is learned by these people becomes acquired by others."

The insoluble handicap for Verheugen though is he is a bureaucrat, trapped in a nexus of the biggest bureaucracy in the world. And it is to that bureaucracy that he is turning for ideas, asking for proposals to be submitted for discussion at an informal European Council on 20 October.

That is the final hope for us all – bureaucracies become so cumbersome that they cease to be able to function and, being inherently incapable of reform, they must eventually self-destruct. Out problem is the amount of damage they do on the way, and the mess they leave behind them.