We cannot afford to play fast and loose 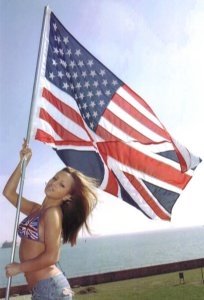 To give credit where credit is due – and, believe me, there is very little due - there is a good opinion piece in The Times today from Gerard Baker.

Under the heading, "One friend Britain must stand by", he argues that the first task for the next prime minister must be to make sure that sure foreign policy is right behind America.

You would expect a determinedly Atlanticist blog like ourselves to agree with such a sentiment. But Baker makes the case for the continued alliance.

What worries him is that, with the impending change of prime minister – although who knows, or case, when - the country seems to be in a mood to seize "to choose a radical new turn: end the ruinous special relationship with America and construct a new foreign policy that pragmatically chooses ad hoc between go-it-alone bulldog independence and alignment with our European "partners".

There is even a hope, Baker writes, that Gordon Brown will seize the opportunity to declare his independence from the US yoke, reflecting the poll this week The Times – on which we commented on this blog - that suggests a majority now favour much looser ties with the US.

…if the next prime minister is a real leader, and not a mere implementer of the latest public opinion trends, he will take a firm stand against the seductive anti-Americanism that has Britain and much of Europe in its grip.

He should state, categorically, that whatever our reservations, whatever our irritations, Britain will stand with America. Not because Britain is a weaker power that has little choice, or in the hope of some quid pro quo, but because it is the right thing to do.

There is no need for this to sound craven or submissive, adds Baker:

It can be a balanced and candid assessment of the world and its problems in the five years since 9/11. It should acknowledge the disquiet and alarm in Britain at what has gone wrong. It should offer a reasoned critique of the way the war in Iraq has been handled, of the overreach by the US in its handling of matters such as detention of suspected terrorists. It can distance Britain from all those hints of religiosity and that slightly cloying idealism that Americans of all political persuasions go in for.

The main argument though is that our reservations should be put in their place. A new prime minister's government should insert into the fevered debate on foreign policy in Britain a sense of proportion and history:

It should say that, whatever we think about the Iraq war, we are in no doubt where right lies in that struggle now. The insurgency in Iraq is not some heroic struggle by the oppressed against neocolonialism but murderous terrorism by competing groups of thugs. Over Afghanistan too, despite our tragic losses there in the last few weeks, it should recommit Britain to resisting the attempts of a small minority of Afghans and their foreign friends to turn that country back to the medievalist nightmare from which it has only recently escaped.

This new statement of our foreign policy interests should say that, while Britain will reserve the right to criticise Israel’s policies, it will have no truck with the spreading assumption that Israel is the principal author of the Middle East’s problems, and that that nation's security against terrorists and states who would destroy it is an essential objective of British policy. It is time, in other words, to identify the enemy and stop identifying with him.

The post-Blair foreign policy should above all seek to elevate the British public's vision above the trials and errors of the past five years. It should remind the people that America represents still, as it has for the past 60 years, the last best hope of freedom.

Whether you agree with the detail or not, that is the nub of the issue. Whatever complaints we might have about the US – many of which, undoubtedly would be echoed by a large number of US citizens – the fact remains that the US is our most steadfast and reliable (if that is not tautology) ally. We cannot afford to play fast and loose with such a relationship.