Someone seems impressed by Western negotiations with Iran 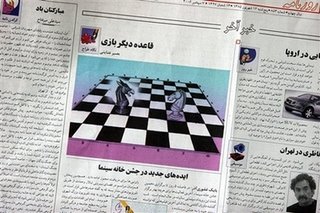 The New York Post reports that our good friend, Iranian President Mahmoud Ahmadinejad has been continuing his campaign to promote freedom and democracy in Iran.

“Iran's most prominent reformist daily, Shargh, or East, ran a cartoon Thursday depicting a horse and donkey facing each other on a chess board. The donkey - a symbol of ignorance in Iran - has his mouth open and light around him.

Ahmadinejad reportedly said he felt there was a light around him, and that world leaders focused unblinkingly on him when he addressed the U.N. General Assembly last year.”

I am a little puzzled by the fact that it is Iran that is portrayed as the donkey in the nuclear negotiations with the West but the newspaper has its own battles to fight. I recall an evening spent with Russian friends in Moscow in 1990, a few months before the Soviet Union bade the world farewell. We had a discussion about newspapers and what Western ones might have written about the Soviet Union. In response to some question I said airily: “Oh well, it’s only newspapers. You can’t really believe them.” There was a shocked silence round the table. Eventually, somebody asked rather timorously: “What not yours either?”

The link to the story came from AllahPundit, who, in the same posting compares the large Iranian competition for the best anti-Semitic cartoon to the Israeli competition run in response to it. I have to agree with AllahPundit – the Israeli cartoons are much funnier. Still you can judge them for yourself.