The real business of politics 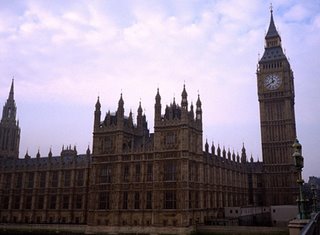 Just to show there are no hard feelings, this time I completely agree with the sentiments expressed by Simon Heffer in his op-ed in The Daily Telegraph today. He writes:

The past few weeks should have convinced most of us that a knowledge of politics, and years watching the game, were now inadequate for a commentator like me to be able do his job. A grasp of psychiatry would be much more helpful, especially where the Labour Party is concerned. Politics used to be about ideology, but now it is about love and loyalty. Does Gordon love Tony? Does Tony love Gordon? If the answer to both parts is no, then how does it affect the delicate balance of the Labour high command?

Perhaps most important, since we technically live in a democracy, what on earth are the general public outside the G-Mex centre in Manchester, where Labour's conference is being held, supposed to make of all this? Now that we have heard from both of the alleged titans of New Labour, and they have both preened and postured in their respective corners, can we perhaps get back to the real business of politics, which is to govern the country?

The trouble is that the chattering classes, the politicos, the wannabes and sundry groupies are no longer interested in governing the country. That requires knowledge, hard work and some understanding. Moreover, as anyone who has been engaged in the process will tell you, it is at times extremely tedious and unrewarding.

That in part accounts for the attraction of the European Union. In performing its role as a gigantic law-making machine, it saves the politicos the trouble and tedium of having to legislate on the vast number of dry, technical issues that a mature democracy seems to think essential. Instead, they can concentrate on the "real" issues – such as how to get elected – without having to bother their pretty little heads about the real business of government.

So it is that politics has been reduced to all the gravitas of a soap opera, its "stars" competing for air-time with the next episode of Neighbours or Corrie, while – as one of our forum members so aptly puts it – our media cease to be political commentators and become theatre critics.

Needless to say, this infantilisation of politics is attractive, as much of the real business of government is indeed tedious. For instance, no amount of "sexing-up" is going to make the detailed scrutiny of a draft law interesting – the process of line-by-line analysis, changing commas into full stops, amending part-clauses and knocking out obscure sentences which, years later, could have a profound and damaging effect on a small (or even large) number of people.

How much easier it is to focus on the salacious gossip – who is slagging off whom; who is shagging who's wife (or boyfriend) – and all the clever-dick tittle-tattle that emanates from the political hothouse, populated by second-raters distinguished only by having intellects in inverse proportion to the size of their egos.

But, while this is all good "entertainment", it is also the death of good government. When the elections become beauty contests rather than sober assessments of the performance of governments, politicians will play to the gallery rather than get down to the nitty-gritty of good administration.

And as long as the media fritters away its time and power on giving these buffoons space and airtime, instead of using their skills to make the dull interesting, and thus inform rather than titillate the population, the politicians will continue to value acting skills and "presentation" over substance.

It is here that the antidote is the internet – a superb medium for conveying information and a portal through which the mass of detail we need to know can be accessed. Never has participating in the democratic process been easier. But, unfortunately, the internet is equally capable of becoming a vehicle for accessing the same, low-grade titillation and dross that so gratifies its authors and entertains the masses.

The trouble is that being a grown-up in a complex and increasingly dangerous world requires a sense of responsibility – a realisation that being a citizen of a democracy requires more than self-gratification and the right to 24/7 wall-to-wall entertainment. It requires taking the time out to explore and understand the issues, to complain long and loud when we are misinformed, misled and badly governed. In other words, being grown-up requires that we behave like adults.

But, as the politicians and the media are failing the test, so is the internet – at least on this side of the Atlantic – where it too is dominated by the trivial, the salacious and the populist. And that must reflect the readership which finds it easier to dwell on the infantile than to assume the responsibilities of adult citizens.

Thus, there is a hard nugget of truth in that phrase, "we get the governments we deserve". If we wish to dwell on the trivial, the jokey and the superficial - to the exclusion of all else - we will continue to suffer the ministrations of the dross that populate the political classes.

Yet, by the same measure, our salvation is in our own hands. Politicians are nothing if not populists and if they perceive that the public is in no mood for the low grade fare that they and the media insists on doling out, they will change. And the internet is one of the most powerful (but not the only) tools for sending such a signal. Abuse it and we only have ourselves to blame.

So, to paraphrase Heffer, we need get back to the real business of politics, which is to govern the country. Boring, at times it might be but hey! Who ever said it was easy being a grown-up?