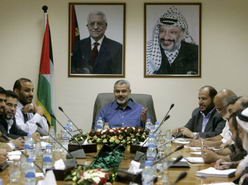 The creation of a Palestinian government through an agreement between Fatah and Hamas has encouraged the European Union to start backtracking on their assurances that they will not lift the economic embargo (except for a large amount of money sent in supposedly for humanitarian purposes that allow the PA to use other funds to pay their armed militias) until Hamas agrees to the “ending violence, recognizing Israel and accepting previous accords between Israel and the Palestinians”.

Far from insisting on the three conditions, according to Ahmed Yusef, political adviser to Palestinian Prime Minister Ismail Haniyeh, an acceptance of the Hamas stand on all those issues – i.e. a complete refusal – will now be known as “a more balanced stance regarding the Arab-Israeli conflict”.

To be fair, the information comes from the new Palestinian government that has not had time to achieve anything very much or, even, make its presence felt in the Palestinian territories but we have not had a denial from the European Union.

The argument is that the new government is not a Hamas one but a coalition between the two main political groupings. So, that’s all right. Furthermor, as Ha’aretz quotes Ahmed Yusef saying:

“Recognition and other political issues will be part of the negotiations Abbas will hold. We have granted him full legitimacy to negotiate on behalf of the entire Palestinian people. If he can achieve a diplomatic solution, his plan will be presented before the Palestinian institutions, such as the government and the parliament, and they will need to authorize his proposal. The Arab initiative and the previous UN resolutions will be part of the government's future political agenda.”

Which means precisely nothing. The Arab initiative is the Saudi plan for Israel to withdraw to the 1967 borders (which, of course, did not involve the existence of a Palestinian state, Gaza being then in Egypt and the West Bank in Jordan).

The purpose is greater pressure on Israel, though, clearly no pressure is needed on such states as Syria or Iran or such organizations as Hamas and Hezbollah.

“We will put forth a broad political program that will result in greater European support for the Palestinians, and that will create more diplomatic pressure on Israel, in the hope that this will soon end Israeli occupation. A new diplomatic initiative is needed to bring about change and a solution through peaceful means. The initiative must include greater European, international and Arab involvement than the failed initiatives of the past.”

Can’t wait to see the broad political programme. Will it include democracy and freedom of the press in the Palestinian territories as it exists in Israel? In the meantime, let us remember that, according to Hamas, all of Israel’s territory is regarded as occupied. By supporting the new Palestinian government’s point of view the EU accepts that reading of the Middle Eastern situation.