Well, they've buggered that one up 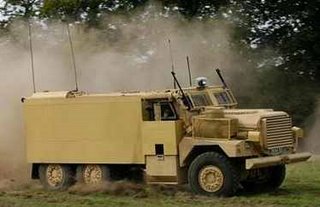 Revealed in The Daily Telegraph today is the shape of the new Cougar, 100 versions of which the MoD is purchasing to "relieve the hard-pressed snatch Land Rovers in Iraq and Afghanistan."

Curiously, the paper refers to the vehicle being a six-seater, where the original six-wheeled version, as ordered for the Iraqi Army, is intended to carry 14 troops.

From previous information, we understood that the vehicle was to have additional armour and now we see from the photograph what the MoD had in mind – great slabs of side armour, presumably to protect against explosively formed projectiles (and possibly, RPG-7s). 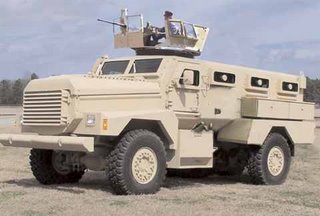 Compared with the original design (right), therefore, the armoured side windows to the troop compartment have gone, thus depriving the occupants of that all-important asset, situational awareness – the ability to see what is going on outside the vehicle and to assess the tactical situation, instead of being forced to dismount blind.

Additionally, the windows had gun ports, from which it was possible to fight from protected positions within the vehicle. This will not be possible with this version.

Further, the crucial feature of the basic design is the v-shaped hull, which deflects blast sideways and away from the vehicle – an attribute which contributes greatly to its survivability. This accounts for the fact for that, since their introduction by the US Forces, they have taken over 1000 IED "hits" without a single loss of life.

But, with the addition by the MoD of the new side armour which extends below the top line of the "v", a blast trap is created which will contain rather than deflect a bomb detonated under the vehicle. A large enough bomb will be able to flip the vehicle on its side, leaving the crew vulnerable even if they do survive the initial blast.

Then, unlike the US patrol vehicles, there is no top turret. From the look of the wire guards (the projections from the front of the cab) the MoD intends to have "top guards" standing unprotected in an aperture in the roof. Thus, for all the protection given by the vehicle, one or two crew members will still be highly exposed.

Basically, there is always a fine line to be drawn between additional armour, situational awareness and the fighting capability (with troop gun ports). Given that the unmodified vehicle has an unbroken record for protecting its occupants, it seems to me that the MoD has crossed the line.

Then, on reflection, you would expect the MoD to take a basically sound design and completely bugger it up. The civil servants have to justify their existence somehow.