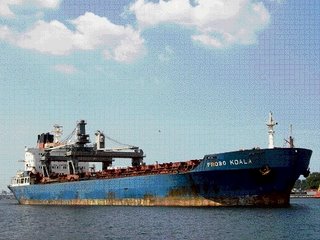 In one had to point to one organisation that had done more than any to demonise waste disposal and legitimise the flood of restrictive legislation on waste, Greenpeace would be a pretty good candidate.

Thus it is inevitable that, when a disaster arises in part as a result of the very legislation of which Greenpeace so much approves, they will be the last people to recognise the consequences of their own actions.

The disaster in question is a waste oil dumping scandal, involving the ship Probo Koala (pictured above), which has killed at least eight Africans, including children, and poisoned thousands of Ivory Coast residents, reported (sketchily) by Reuters via Toronto Star (which is equally uncomprehending of the underlying issues).