Why don't they just belt up? 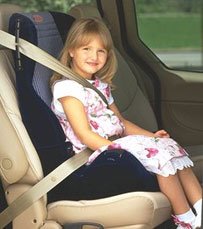 That is the headline awarded to pontificator extraordinaire, Mary Ann Sieghart, in The Times today, who is deploring the new seat belt law due to come into force on Monday. This requires that most children up to the age of 10 (and shorter children of 11) must be strapped into special child seats or made to sit on booster cushions, on pain of a £50 pound penalty.

Sieghart makes some good points, not least the inconvenience caused when children are occasional passengers and there are no booster seats available.

Yet, she writes, "I don't suppose ministers thought twice before enacting it (the law). To them, it is a trivial piece of legislation, nothing like as important as, say, welfare reform or NHS governance. What they fail to realise is that this sort of law has a far greater — and more annoying — impact on most people's lives than either of the above."

And here we go again… these dismal, opinionated little hacks, so full of themselves that their brains have long been empty. Mary Ann, dear girl, this law is implementing an EU directive, specifically Directive 2003/20/EC. It was passed under qualified majority voting – a system where Britain has less than 13 percent of the vote (going down) and can be over-ruled. Thus, ministers had no choice about it – because it was EU law, they had to implement it.

But such intelligence is not for a dim little hackette like Sieghart. She launches off into demolishing the safety case for the new law – fair enough – but then concludes that, "This argument is too sophisticated for ministers. So the rest of us will suffer…."

No, you vain, stupid woman. The ministers were well aware of the arguments, and Dr Ladyman, the current transport minister probably has twice the brains you have. But he had no choice. I say again, it is EU law and must be obeyed.

At least Tom Utley knew it and was able to write a stonking piece last March, putting the blame exactly where it belongs. So, lady, if you can't get it right, why don't you just belt up?

Email ThisBlogThis!Share to TwitterShare to FacebookShare to Pinterest
Labels: NHS