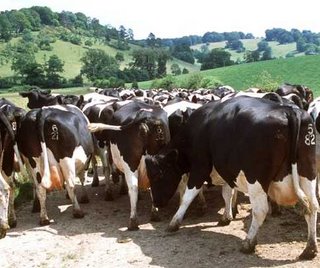 Turning away from great events and life and death matters, for the moment, we turn to er… life and death matters – and a particularly egregious demonstration of how Britain (and the rest of the 25 member states of the European Union) are run by an alien government – a matter which, potentially, has massive international implications.

To put this in context, few people will forget the scourge of BSE – or "mad cow disease" as it became popularly known – a disease which made its official appearance first in Britain and has since been detected in countries throughout the world.

In the initial stages of the disease – as in any animal disease, with or without human implications – early detection is vital, and control authorities rely on farmers and owners to report any ailing animals (or birds). To facilitate early discovery, it is common and necessary to pay compensation to the owners, to overcome the disincentive of a financial penalty arising from making reports.

At the early stages of what turned out to be a major epidemic, however, our government decided only to pay 50 percent compensation for cattle in which BSE was detected (which invariably followed a report from a farmer). As a result, there was a national outcry, with enormous media pressure for 100 percent compensation, for fear the disease would be concealed.

The then government quickly caved into the pressure and full compensation was paid, even in the 2001 Foot and Mouth epidemic, reinforcing the principle that such payments were an essential part of any disease control programme.

But, from 1 January 2007, all that is set to change – not through any desire or action on the part of the UK government, or via a process over which the government has any control at all.

The instrument of change is to be the EU commission which, hitherto has permitted the payment of compensation to agricultural enterprises through what is called a "block exemption" to state aid rules – without which such compensation would be considered state aid and thus illegal under EU rules.

But the sole arbiter of what is and what is not state aid is the commission, which is acting under the mandate of the Treaties and needs no approval or authorisation from member states to change the detailed rules as it thinks fit.

Therein lies a bombshell. Issued on 8 September with a closing date of 17 September was a "consultation paper" from our own ministry concerned with agricultural affairs, known as the Department of Environment, Food and Rural Affairs (Defra) telling us that the commission intends to change the rules. This, of course, is "consultation" in name only, as no changes can or will be made to the document under consultation.

Set out in the commission document is a move away from universal full compensation that limits aid (i.e., compensation) to small and medium-sized enterprises (SMEs), and then to the 75 percent of the market value of animals slaughtered (80 percent in less favoured areas (LFAs)), plus an overall limit for animals slaughtered to outbreaks of disease which result in a 30 percent production loss on the holding concerned.

In the case of BSE, where losses were often confined to small numbers of animals (typically in ones or twos) in often quite large herds, this would have meant that no compensation at all would have been paid to the majority of farmers, with the likelihood that detection of the full extent of the epidemic might well have been delayed.

And, since we know not what might lie in the future, waiting in the wings is perhaps another disease or similar epidemiological characteristics, for which no compensation will be paid and which farmers, therefore, will be reluctant to report.

Nevertheless, since this is being put in place by a Commission Regulation, there will be no negotiations or vote on these issues. Says Defra in its consultation document, "the Commission will decide having listened to the views of the Member States and those with an interest."

What is stunning members of the farming communities (and, we are told, Defra) is the suddenness with which this issue has emerged and the speed with which it is to be implemented – and the fact that no one is able to block it. The commission is not in any way required to take account of the views of member states.

The UK, also, is particularly disadvantaged, in that its average farm size is seven times that of the community average, which means that fewer farms will in any event qualify for compensation that their continental neighbours will be able to pay.

In international terms, though, it is in the interests of every nation in the world that diseases are detected quickly and effective action is taken before they spread not least because – as is so often the case – disease knows no boundaries.

With one fell swoop, therefore, the commission is putting at risk the whole world. It is also abandoning a system that has been in place in the UK for several centuries - before most EU member states were countries - which is well founded, relatively equitable (not that all farmers would agree) and which gives the authorities a fighting chance of containing disease epidemics.

But our government in Brussels has spoken. No longer in vast areas of public policy and lawmaking are we an independent nation and, in this case as with so many others, our job is but to obey – like it or not.

More details on our partner site and Farmers Guardian today.