They are all going to New York 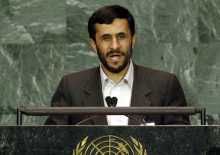 SecGen Kofi Annan is certainly going out in a blaze of glory. The last session of the General Assembly under his enlightened guidance will be addressed by Hugo Chavez as well as President Ahmadinejad.

Will President Chavez ever set foot in Venezuela, a country, which may be oil rich but where most pumping stations are finding it hard to stay in business? In the last few months he visited Cuba, Russia, Belarus, Syria and probably a few other dictatorships I cannot quite recall at the moment.

President Ahmadinejad is due to address the General Assembly, on September 19, at 7 pm. President Bush is due to address the meeting at 11.30 am of the same day and in between, we are told by NewsMax.com, SecGen Annan (father of Kojo) will host a lunch, which will be attended by both. I am not sure what I hope for: to have lots of other people sitting between them or to have them sitting next to each other.

Now here is a question to our readers: should there be a demonstration in NYC on that day, who is it likely to be directed against? President Ahmadinejad has managed to con the EU3 negotiators over the nuclear fuel enrichment question and has snapped his fingers laughingly at the Security Council. Will anybody accuse him of endangering the world through his unilateralist policies?

President Ahmadinejad has called for the destruction of Israel and has denied that the Holocaust had ever happened. Iran has been running a competition for Holocaust-denying and anti-Semitic cartoons. Will anyone suggest that the man is interested in ethnic cleansing at best and genocide at worst?

The man’s domestic record includes the arrest and beating up of various demonstrations, including of women, who protested against the unfair rape laws; the destruction of satellite dishes and arrest of bloggers; the public hanging of young boys who had been accused of being homosexual and of a young girl who had been raped by an older relative and was, therefore, accused of immoral behaviour; a call for the removal of all non-religious and liberal-minded lecturers from the universities. Will anyone carry placards showing the Nazi swastika on a picture of the Iranian president?

As Allahpundit reminds us, the last time President Ahmadinejad addressed the General Assembly and ranted about the need for the world to be conquered by “peace and justice” as interpreted by him and his friendly ayatollahs, he also told the world that he felt a special light around him and saw the world leaders watch him unblinkingly for many minutes. Will anyone make disdainful comments about this ridiculous religious self-importance?

Well, I think we know the answers to all those questions. I am prepared to have a bet with anyone who is willing to put money on it, that all those comments, statements, demonstrations and placards will be in evidence, all centred on President Bush.