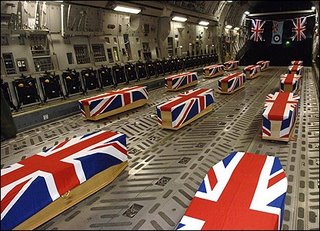 Having dealt in a little detail with the Afghan situation on Sunday, what is particularly remarkable about the piece to follow is that it cites the European Union's special representative in Afghanistan, Francesc Vendrell, who not only seems to make a great deal of sense but also seems to corroborate the source we used in our Sunday piece.

Now, before dealing with the reports and other information, the summation of which has worrying implications – a personal note.

Frankly, I am getting more than a little tired of the self-obsessed indulgence the media is currently displaying with the Tony and Gordon show in Manchester at the Labour Party conference. But that irritation also extends to the British political bloggers who seem quite content to follow in the wake of the MSM and prattle endlessly about exactly the same issues.

Often the humour and analysis is about the level one would expect of the 4th form of a second-rate boys boarding school and I have heard more intelligent comment from college students in fifth and sixth forms in the lectures I have been given to schools recently.

In a nutshell, the Tony and Gordon show is fluff – nothing is going to be decided immediately and much water is going to pass under the bridge before things come to a head. Meanwhile, we are a nation at war, we do have troops committed to a dangerous foreign venture and, if the material we have accumulated in this and our previous reports is at all representative of the situation, there is the potential for the situation to go seriously belly-up. In that case, over the winter, we could be seeing soldiers coming home in coffins in very large numbers.