The wrong sort of government 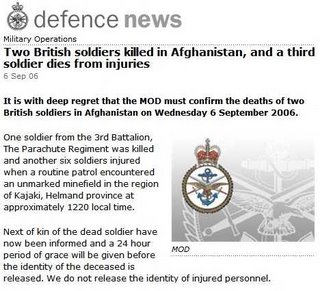 I was struck today by four things. Firstly, following up on the overnight story about the land mine incident in Afghanistan, I searched all the on-line dailies for more details, only to find that accounts in different newspapers were wildly different.

Overnight, we had picked up The Times version, which is one of the first up on the web, and that recorded a soldier being "killed after his vehicle hit an unmarked land mine today…".

The essence of this account seemed to be confirmed by The Independent, which reported that, "one of the soldiers was killed and six others injured when their convoy hit a landmine in Helmand province… It is believed the troops were on a routine mission when they hit the mine. The troops' patrol had unwittingly strayed into an unmarked minefield, Nato said."

The Daily Telegraph, however, cited the Ministry of Defence, saying that "the soldier who stepped on a mine was on a patrol not in contact with any enemy." It then cited "a military source", saying that, "our initial assessment is that this was old anti-personnel mines".

Turning to the MoD site, though, all we get is:

One UK soldier has died and five others were very seriously injured as a result of a land mine contact in northern Helmand Province at approximately 1220 local time. Another soldier received minor injuries.

There is no mention of a vehicle, but neither was there any suggestion that it was a foot patrol that was hit.

Turning then to Google news, there were just short of 150 stories on the incident, in diverse media outlets, but none gave any additional or clarifying detail. Basically, they were all variations of the MoD press release.

This, then, was the first thing that struck me: how ill-informed we are, and how little the media actually know what is going on out in Afghanistan. The MoD site is a study in obscurity and none of the media seem bothered enough to find out what really happened. 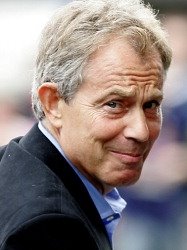 Secondly, in an attempt to glean more information, I resorted to unofficial Army forum, which sometimes has details that the MSM does not carry. In this case, it did not, but I came across this thread commenting that, while 17 members of the armed forces had died in the last few days, instead of it being real front page news, "we are swamped with Blair leadership leaks".

Certainly, reference to Google news confirms this – as if it needed it – with, currently, 1,542 stories posted on the subject, more than ten times the number on the dead soldiers.

That was the second thing that struck me – hardly new, I have to concede – that there is something extremely perverse about modern news values. That is not to say that the Blair leadership issue should not have been covered but, as always, it was the amount of space dedicated to the issue that offends.

In the context that the Afghanistan story harbours what is probably a major procurement scandal, the third thing that struck me came from a number of comments on our own forum to the effect that the British government was not alone in its neglect of its armed forces.

One contributor offered his experiences of how badly the German Army was equipped, while another offered a link to Spiegel online, headed, "German army feels the pinch", recording some of the problems the modern armed forces were having to deal with. 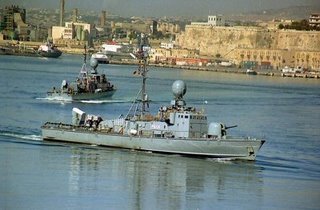 I was particularly taken with the account of Angela Merkel's visit to the German naval base in the Baltic seaport of Warnemünde, which the paper counterpointed with the experiences of two naval patrol vessels, the "Zobel" and the "Frettchen", which are about to be detached to Lebanon as part of the UN peacekeeping forces. Says Spiegel,

Out at sea the navy was showing off the capabilities of two of its speedboats, the "Zobel" and the "Frettchen." One of the two craft shot magnesium flares into the air to demonstrate the navy's latest method of distracting enemy rockets. Germany has promised to send three or four of these boats to Lebanon as part of the United Nations peacekeeping contingent being assembled there.

It's a daring promise on Germany's part, given the problems the boats have experienced on previous missions in the Mediterranean. At high speeds, the crafts' ribs broke in the Mediterranean's heavy swells. Since then, the ships are no longer permitted to travel with full fuel tanks and have been forced to reduce their weapons payloads while in the region. Higher water temperatures have wreaked havoc on cooling systems for the vessels' electronic systems and diesel engines, forcing the speedboats to travel at reduced speeds.

The journey to the Levantine coast will be a long one. Because the boats cannot be operated without their full 34-man crews, they'll be forced to put in to port every two days. The trip for these so-called "speedboats" will be everything but speedy and will take an estimated two weeks.

But no one is likely to care much about the delay, because these are not the types of ships that will be needed for one of the peacekeeping force's key tasks in Lebanon, which is to search other vessels. The rocket launcher on the afterdeck takes up so much space that there is no room for a rubber dinghy that would enable the German sailors to board a suspicious ship. The two frigates' "Sea Lynx" helicopters, which will also be redeployed to the eastern Mediterranean in the coming days, will handle the task instead. But even these helicopters are not designed for such use and will have to make two flights to carry a complete twelve-member search and inspection team.

The equipment difficulties the Lebanon mission highlights, adds Spiegel, are symptomatic of the Bundeswehr's overall condition and of the fact that Germany's armed forces have not been properly equipped for their changing duties for some time now. This chronically underfunded, poorly outfitted and physically exhausted force is now embarking on a new foreign mission, with ten others already underway.

In a way it is some small comfort that we are not alone in suffering inept governments, although it is indeed very small comfort.

The fourth and final thing that struck me is how bored I am with the European Union – in particular the sheer pettiness of its remit and the tedious scope of its day-to-day activity. 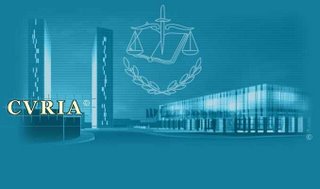 Top of today's agenda was and EU court ruling on the British interpretation of the working time directive. Britain, it seems, broke European law in the way it advised companies to interpret EU rules on working time limits for employees.

This, in its own way, is actually quite important as it has significant economic implications for the nation and it strikes at how the Labour government had sought to minimise the impact of the directive by issuing misleading and – as it turns out – illegal guidelines on the law.

But, the truth is that I just could not being myself to write about it – and neither could my colleague. When we are engaged in a war of terror and our troops are in foreign fields, dying as a result of the neglect of their own government, the working time directive seems just too trivial for words.

That – even if I have said it before – is the real reason why we must leave the EU. It forces us to spend too much of our time and energies on the trivial, elevating issues to the top of the political agenda that should, at best, be dealt with by some minor clerk in an obscure ministry – if at all. We have too much of the wrong sort of government, which is distracting us from the real issues, the matters of life and death.