Death of a courageous journalist 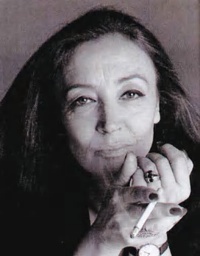 This time from natural causes. The death of Oriana Fallaci was announced today. We have mentioned this astonishing and admirable lady before, one from whom our own mealy-mouthed journalists who used to complain because Alistair Campbell used bad words to them, could learn something.

Ms Fallaci had been a war correspondent and an abrasive and controversial journalist, whose interviews have become legendary. In the last two years she has found herself in serious trouble because she has dared to write and publish two books: “The Force of Reason” and “The Rage and the Pride”.

Briefly, they are angry, even enraged calls on the West to stand up for its principles and not to give in to the Islamist demands. Inevitably, she was attacked, not just by the usual suspects from the Islamic community (no doubt a few demonstrations were organized in countries as far away from Italy as possible) but, sadly, by others as well.

Environmental Republican describes the American left-wing attitude to this woman whose cardinal sin was speaking what she believed to be the truth, even if it did not agree with “liberal” ideology. (Quotation marks are needed, since that ideology has no relation whatsoever with genuine liberalism.)

Michelle Malkin has an excerpt from her essay on the London bombings. Here is the full text. In it she appeals directly to Pope Benedict XVI to lead the fight for Western values. Whether the Pope listened to her or made up his mind separately, we know that he has taken up that challenge. And guess what. There were demonstrations denouncing his Regensburg lecture in Kashmir and other places where it is unlikely they have ever heard of the place or the man.

The Left in Europe hated her as well. But the saddest part of the story is the caving in of the Italian judicial system. Fallaci was found guilty of insulting Islam and sentenced to two years’ imprisonment.

She had to stay in the United States, though I note that her death seems to have occurred in a Florence hospital. Perhaps, she was allowed home to die. Alas, we shall not see her like again.