This is quite interesting 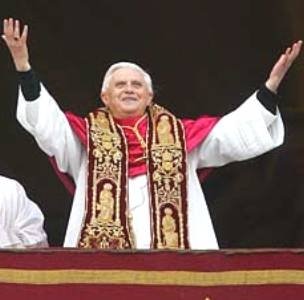 Hilary White, journalist and blogger on religious matters has found some interesting patterns in the way Pope Benedict’s speech at Regensburg University was reported by the BBC, the Guardian and the New York Times. (Hands up those few who are surprised by this list.)

As the article points out the early reports of the lecture were very subdued and uninterested. There was the Pope talking about reason and faith and the need for both in life and there were the journalists, secularists to a person, completely uninterested in any of it. Or, perhaps, they found it hard to follow his arguments. Or, perhaps, they had never heard of Byzantium and her emperors.

Then, three days later, the BBC suddenly began to report fears of riots and actual riots in various Muslim countries and areas. This was followed by the Guardian and the New York Times and also, as Hilary White does not mention, a large proportion of the MSM in Britain. Even the Daily Telegraph spent some time bloviating on the subject of what might have gone wrong in the Pope’s entourage for him to have been allowed to make such an imprudent speech.

News agencies tut-tutted about the Pope’s lack of media finesse, not, probably, the first thing that comes to the Holy Father’s mind when he plans a lecture on theology. (I have said it before and, no doubt, shall say it again: one can but wish that the Archbishop of Canterbury spent a little less time on media finesse and a little more on theology and ideas. Well, one can wish.)

So the story grew for several days with frenzied demands for an apology and various rather violent though not very big demonstrations by the Islamist rent-a-mob in various countries, including Britain.

Did the media create the crisis for some reasons of its own? Was it a way of getting at Pope Benedict, a hate-figure for them as Hilary White argues?

This is not to be excluded, though the desire to create a story where none exists may well be an even bigger incentive than hatred of the Pope. Then again, there is the media’s own crowd mentality. Each journalist wants to say and write whatever the others have said or written.

There is also the problem, articulated by Melanie Phillips, with regards to reporting from the Middle East of the editorial narrative. For most of what Rush Limbaugh calls the drive-by media, the narrative is that of angry Islam being provoked by insensitive Westerners. (That’s when they are not being provoked by oppressive Israelis or jack-booted Americans, William Dalrymple, travel writer and historian of India, being a very fine example of that type of journalist.)

Conspiracy or carelessness? A vicious desire to do down the West or merely an ignorant and nasty desire to break up everything of value? Whichever it is, the BBC, the Guardian and the New York Times, together with their acolytes and followers can take responsibility for the murder of Sister Leonella Sgorbati.