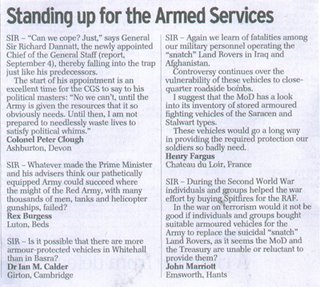 The Telegraph letters page today continues with a tranche of correspondence about the inadequacy of military equipment – albeit down page – under the group heading, "Standing up for the Armed Services".

That indeed is an admirable sentiment but it is not one in which the media is showing any particular interest, its main contribution today being to recycle the MoD press release which reveals the name of the solder who was killed in Wednesday's mine incident.

The soldier who was killed has been named as Corporal Mark William Wright, 27, from Edinburgh, who was in 3 Para. According to the MoD account, as retailed by a very small number of newspapers, "he died attempting to save the life of a fellow paratrooper who had been injured in a mine incident. He did so in complete disregard for his own safety whilst fully aware of the dangers to himself."

It is right and proper that the bravery of soldiers who are killed while doing their duty should be thus acknowledged but, as I remarked in the comments section of the Scotsman, which also ran this story, why is the media not asking why these deaths occurred?

As we have pointed out on this blog, both German and Canadian forces in Afghanistan have mine-protected vehicles. Both forces have had vehicles run over mines (and attacked by suicide bombers). In all cases where mine protected vehicles have been involved, the crews have survived with only minor injuries.

Here, the media do have a duty. They have a role in protecting our troops by making sure that they are properly equipped. So far, they are not doing it. Instead (with a few honourable exceptions), they simply regurgitate uncritically the MoD press releases and, occasionally publish ill-focused pieces about military equipment, without ever going for the jugular. 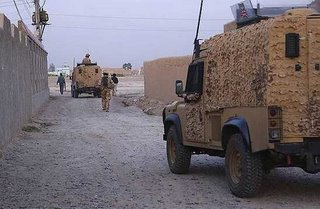 What the information on Corporal Wright does, however, is clear up one point. Early information gave a casualty roll of seven, which is one more than would be expected to be riding in a "Snatch" Land Rover. That Corporal Wright went to the aid of his fellow paratrooper suggests that six were caught in the initial blast, which is entirely compatible with a "Snatch" having been hit.

But, as we have observed, the media seem to be entirely incurious about what actually happened and, even more damning, seem entirely unconcerned that the MoD has no plans to introduce a mine-protected patrol vehicle into the Afghanistan theatre. The average idle hack is content to take the MoD at its word that "tougher" armoured Pinzgauers are to be supplied by the end of the year.

Thus, while, obviously, we cannot loose sight of the fact that when troops are killed in combat, the primary responsibility lies with the enemy who killed them, there is an additional chain of responsibility. That lies first at the door of the MoD, for failing to equip and support them properly, then at the door of the elected politicians who fail to hold the government properly to account.

But responsibility also lies at the door of the media. In a democracy, it has a duty to highlight the inadequacies of our government and our politicians for, without the information which only the media can disseminate, there is no accountability. Here, it is simply not doing its job.

When, in the fullness of time we see the butcher's bill in Afghanistan reach the symbolic figure of 100, you can bet the media will be right there, full of indignation and outrage, gushing concern for "our forces". But when it comes to doing something constructive to prevent them getting killed in the first place, it is just delivering empty rhetoric.