Getting above their station 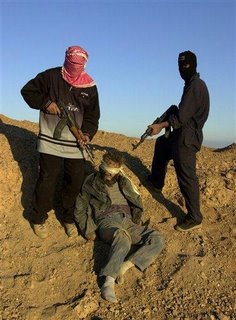 Michelle Malkin is conducting a heroic battle against Associated Press over on her site, beating off a sustained PR campaign from the agency over the over their photographer – and terrorist sympathiser - Bilal Hussein, who took the delightful picture shown on the left (Michelle explains the context).

Interestingly, it was also AP which fronted the "rebuttal" over the Qanagate affair, rushing into print to condemn this blog's work without so much as having interviewed its editors.

At least this time, Michelle had the dubious privilege of being interviewed by AP reporter Robert Tanner but, as she says:

Instead of focusing on AP's questionable news suppression and Hussein's so-called journalism, Tanner quotes a few critical bloggers and then devotes the rest of the article reiterating the AP's defense of Hussein's work, quoting the AP and left-wing human rights crowd's call to free or charge him, and quoting liberal bloggers accusing conservative bloggers that unearthed this story of "thuggery:"

There seems to be something very sinister about the activities of AP and news agencies in general and my guess is that they have ceased to become agencies as such, and are now in the business of peddling influence.

That relates back to Nelson Ascher's paper in Politics Central yesterday, where he observes that, in a democracy, "influence is power".

Interestingly, of all the agencies, AP is possibly the most Europhile, displaying a clear bias in favour of the European Union, but it only just beats Reuters, whose chairman just happens to be Niall FitzGerald, also a member of the rabidly Europhile Britain for New Europe group. As is the EU largely anti-Israel, it seems no coincidence that two agencies which are largely pro-EU should also display a clear anti-Israeli bias.

It seems to me, therefore, that the agencies are no longer content with their passive role of reporting the news and are now seeking to make it – setting the agenda. If that is the case, they are getting above their station and need putting back in their box.