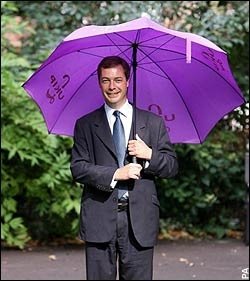 It is not only highly fashionable to believe the worst of politicians but experience also tells us caution is the best policy – the oft-quoted jibe about knowing when a politician is lying (when he/she moves their lips) being more true than most can imagine.

Less obvious are the legions of politicians who are quite frankly stupid – without the wit to hold more than one idea in their heads at one time. These gravitate naturally to political parties, which require of their members only that they hold the "right" idea and nothing else.

Most of these have devised stratagems to conceal their stupidity from their voting publics – and even themselves – although there was one Member of Parliament in Yorkshire (the UK equivalent of Texas, without the charm) who positively paraded his stupidity, declaring that there were many stupid people and they had a right to representation in parliament. (I guess he wasn't that stupid – holding his seat for over forty years in celebrated idleness before retiring on a handsome state pension.)

However, if the stupid are allowed their representation, there is one larger and more strident group that is not allowed that luxury. That group is the eurosceptics – a band of brothers (and sisters) who have that weird idea that, to be an independent, sovereign state, you actually need your own elected government, in your own country, and should not hand over your law-making powers to a bunch of unelected apparatchiks in a foreign country.

So far has our ruling elite degenerated in a country that many outsiders still believe is a democracy that, in 1992 or thereabouts, when a group of dedicated patriots decided to form their own political party to take their case to the people, their message was treated as heresy.

Thus, a party by the name of the United Kingdom Independence Party, seeking to regain that independence which too many people do not even realise we have lost, has been ignored, mocked, ridiculed, slandered and generally insulted – but largely ignored.

The inevitable result is that, outside this country of ours, very few people have even heard of UKIP, as it is more generally known, much less its new leader, elected yesterday by 45 percent of its members who bothered to send in their voting slips, a stunningly unimpressive 3,329 people.

That leader goes by the name of Nigel Farage, a member of the EU parliament since the 1999 elections and leader of an equally unimpressive group of MEPs totalling ten, including himself, the Party having lost two since twelve were elected in the ground-breaking 2004 Euro-elections.

Fortunately, Mr Farage presents a respectable and genial face to the public – although his private life is often less so. His lack of political acumen and intellectual ability barely shows alongside his lacklustre colleagues, which enabled him to crawl rather than storm to victory yesterday.

Also fortunately, the deliberate determination of the media and the political establishment to ignore UKIP reflects in the almost total lack of publicity the Party gains, which means that very few of the voting public realise how dire and uninteresting it really is, and how little it has to offer.

Fortified by that ignorance, a significant number (not large, even by UK standards, but certainly significant) are therefore prepared to vote for it, knowing the one thing they need to know – that it is the only political party dedicated to securing British withdrawal from the European Union.

At the last general election, that amounted to 618,898 people or 2.3 percent of the popular vote – too widely spread to gain a representative in parliament but enough to influence the outcome in as many as 30 seats.

Such is the growing disillusionment with the current party system, however, that more and more people are prepared to ditch their traditional party loyalties and vote for the minnows, of which UKIP is one.

Provided Mr Farage can keep up his geniality in public and the media continues to ignore his party, such is the public mood here that, come the next general election - which could be in two or three years time - UKIP could do even better than it did last time.

This will not be reflected in any seats gained but, with the closeness of the two main parties, Labour and Conservative, the former gaining 9,556,183 and the latter 8,772,598 votes in 2005, it could act as king maker in enough seats to decide the overall outcome of the election.

UKIP members themselves are scarcely aware of their own power in this respect and even electoral pundits who make their forecasts about the state of the parties rarely take it into account - not least because their computer models cannot cope with the complexity. But it is the likes of UKIP, the so-called "extreme" right-wing party, the BNP, plus a myriad of independents and smaller parties which are subtly changing the nature of British politics.

With Mr Farage at the helm of UKIP, the day may now be closer when the political giants are brought down by the minnows. And the immensely enjoyable thing about that will be the media which, having largely ignored the Party all these years, will be the last to realise what is happening.