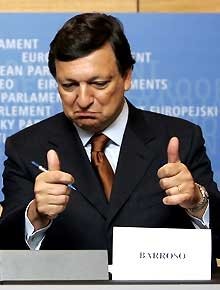 EU commission president José Manuel Barroso's has called for "sweeping reforms" before any EU enlargement, declaring that, "I think it would be unwise to bring in more member states apart from Romania and Bulgaria, which will be joining us soon, before we have solved the institutional question."

The phrase, "institutional question" is, of course, Euro-code for the EU constitution, made clear by Barroso’s further statement when he dismissed the idea of small treaty changes, insisting any further enlargement "is the time to take a decision on the constitutional treaty."

Speaking in Berlin, it seems that the commission president has in mind, amongst other things, "more coherence in external relations" – another Euro-code, this one meaning an EU foreign minister.

One wonders though whether Barroso has thought this through – or whether he is being disingenuous. Given that the French rejection of the EU constitution was certainly linked to enlargement, and was to some extent a proxy vote against Turkish membership. Overtly to link the need for a new constitution with further enlargement, therefore, has to be a certain way of ensuring that any attempts to agree a new treaty are rejected.