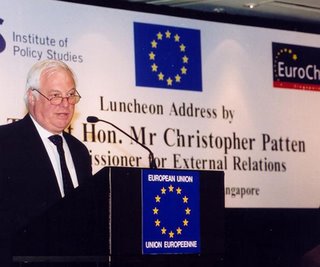 The Times today informs us that Christopher Patten, the former Conservative minister and erstwhile EU commissioner for external relations, has returned to the (political) fray by joining a 12-strong international "Group of the Wise", which is tasked with finding an alternative to the rejected EU constitution.

He wants – or so we are told - to combat the "playground language" of the debate over the constitution in Britain.

Why this unexciting piece of news should grab the attention of The Times – in what is a relatively long article – is not entirely obvious, but it does serve a purpose in demonstrating that some political journalists really do have cloth for brains.

The two in this case are David Charter and Rory Watson in Brussels who diligently note that Patten's involvement "may come as an embarrassment to the Eurosceptic David Cameron…".

Charter and Watson are supposedly experienced and knowledgeable political hacks. How, therefore, can they possibly describe the Boy King as "Eurosceptic"? And, if they do regard him as such, no wonder they thing that true Eurosceptics belong to the lunatic fringe.

With that quality of comment though, no wonder we are in trouble.