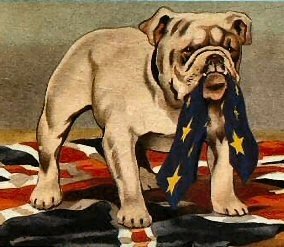 [Health warning: this is not a posting by Dr North so a number of our readers will want to skip it. Please do so.]

As my colleague pointed out earlier, there is one overwhelming topic for today and that is the war the West is waging against another manifestation of oppressive illiberalism. I imagine all of us can recall with great precision where we were and what we were doing when we saw or heard about the planes crashing into the World Trade Centre and the Pentagon.

As for me, that entire day will stay in my memory almost minute by minute. And one of the things I recall very clearly was my immediate conviction that we were at war. My second thought was to wonder where I can sign up. This was going to be a war of ideas, of propaganda as much as of bombs and bullets. I could do that, I thought. Well, it took a little while but I think I managed to sign up for the duration.

We come back to our old problem: the definition of identity, the identity we want to preserve and develop, for one of the ineluctable parts of that identity has to be constant change and adaptation. If we want to freeze a particular moment in history or recreate it in aspic, we become no different from our enemies, who are great at maintaining that there is only one right path and one right attitude. This was true for Nazism and for Communism. It is true for Islamism.

I have written in the past about my interest in wartime films and various curious aspects of the propaganda in them. Let me return briefly to the subject. Among the ones I have seen most recently is the excellent "Night Train to Munich", directed by Carol Reed in 1941.

Any film that has the young Margaret Lockwood and Rex Harrison can never be even indifferent but this one is superlatively good. (One of its great attractions is that the dire Paul Henreid - still with a 'von' in his name - plays a baddie. Heh! That makes up for Viktor Laszlo in "Casablanca". But I digress.)

The film involves the desperate struggle just before the actual start of World War II for the life and work of a Czech scientist whose new invention is supposed to revolutionize warfare. The struggle is between the British and the Germans and the film is reasonably honest about the realities of life under Nazi occupation.

What is interesting is the picture of Britain and the hidden argument as to why the British side is the right one. After all, as Margaret Lockwood points out, the British and the German agents act in exactly the same way when trying to secure her father and herself.

Of course, we see Britain in the last weeks before the war and the picture is, therefore, peaceful and sunny. But there is a relaxed atmosphere, a feeling of freedom, of easy every-day happiness. This is what life should be like, it is implied and this is what it will be like for other countries, including Germany when the terrible shadow is lifted.

All well and good but as the war progressed it became more and more difficult to rely on a simple and slightly passive message. There were various attempts to create some idea, some image of what the war was for as well as what it was against. Few were successful. Probably, the best films were the various quasi-historical ones that harked back to previous struggles: "Henry V", "That Hamilton Woman", "The Young Mr Pitt" and others. Of the ones that concentrated on contemporary life, the Powelll and Pressburger ones were the most interesting and, probably, the most successful. Needless to say, Emerich Pressburger was a Hungarian.

So, what is it we are fighting for? The question is particularly urgent because this war is not just an external one. Despite the various fifth columnists portrayed in films and books (and a few in real life), despite the honeycombing of the establishment by Communist agents, those past wars were essentially external ones. The enemy was outside.

No longer so. The enemy is inside and outside. We are not speaking of a fifth column here but of a large proportion of our population who wants to help the enemy, who is the enemy, whose aim it is to destroy our society.

Can we fight back? Can we defeat this enemy as we defeated the previous ones? One cannot be sure, of course, but I think we can (despite some of the unfortunate allies we pick up en route). But more and more urgently we need to know what it is we are fighting for as well as what we are fighting against.

Curiously enough, the European Commission or its minions realized long before almost any political body in the member states that there is a seamless progression between the internal and external battle in this war. Naturally, they wanted to use it for their own purpose, basing such integrationist measures as the European Arrest Warrant and the European Evidence Warrant on the need to combat terrorism.

The only other manifestation of a link is the fatuous repetition by too many people that we would be safe from terrorists if we changed our foreign policy. We have dealt with that issue in previous postings and shall, no doubt, return to it. After all, one of the things we are fighting for is the absolute right not to live in a state where foreign policy is decided by a bunch of hoodlums. (And no, I don't want to hear any nonsense about Blair being just as bad as the bombers or the imams who tell us that we must obey them or else.)

What the EU does not understand as that would undercut its ideological existence is that it is not just not part of the solution, it is part of the problem. In order to strengthen the project, it has campaigned against national identities, equating nationalism (and nothing else) with war and bloodshed.

As we in the West face another great danger from people who think they are certain of their identity and are determined to destroy what they see as their enemy - us - we need to reverse the tide that destroyed nationalism. By itself it is not good or bad, only what we make of it. Right now, we need to know and we need to be able to define. Just thinking that you know will not be enough in this war.