When is a riot not a riot? 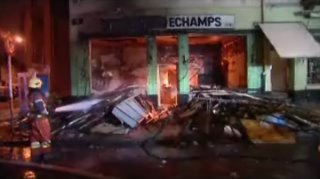 When, it seems, it involves Muslims in Brussels, at Ramadan.

This one is in the Marollen district of Brussels, near the Midi station – the terminus of the Brussels Eurostar link. Riots in this area are common enough. They occur many a weekend, although the activities are usually confined to torching the occasional car and duffing up the Belgian police – who tend to regard the "high spirits" as training exercises.

This one, however, looks to be a little different. It is in its third day and has spread to torching shops and other buildings, including firebombing the local hospital.

Snapped Shot has the story and is tracking the media's curious lack of interest, recording that not a single agency photographer has been despatched to cover the activities of the Muslim mob.

Brussels Journal is on the case as well.