The legacy of Mr Heseltine 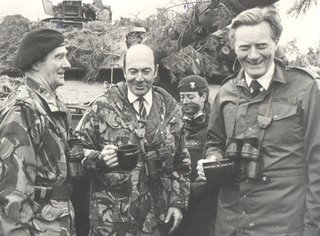 This is a defence posting, and one almost feels the need to apologise for putting up yet another one. However, that is the way the cookie crumbles. This one has wider implications than just defence – posts on other subjects will follow.

Something of the debate about defence spending that should be happening in the UK is beginning to emerge in Germany, where the German Armed Forces have announced ten "mission-oriented procurement and modernisation programmes" worth a total of €5.5 billion (just short of £4 billion).

While the programmes await parliamentary approval, critics have already piled in, saying the Army needs more protected vehicles than have been called for in the procurement plans. 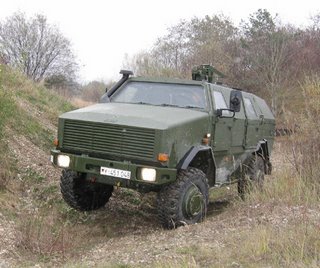 Not least, it has emerged that, while defence minister Franz-Joseph Jung has issued orders that German ISAF forces in Afghanistan should to conduct patrols only in protected vehicles, this order cannot be obeyed. Despite the deployment of mine-protected Dingos, and the decision to buy more, there are not enough to go round. Thus, most of the troops must ride in unprotected “Wolfs” – the Mercedes Benz equivalent of the Land Rover.

While the Army goes begging, however, the big winner is the Navy which gets €3.18 billion, mainly for new frigates and submarines. One of the key items of expenditure, though, is a Luftwaffe programme worth €1.1 billion which includes "Eurofighter Typhoon aircraft role adaptation, integrated logistics support for role adaptation, adjustment, retrofitting and role equipment". This will cost a cool €540 million.

This has had retired Lt. Gen. Manfred Dietrich, president of the German Army Association, fuming. He says that "although the Eurofighter is an important and necessary asset in the German Armed Forces, one cannot draw a requirement of 180 aircraft based on today's missions conducted by the Bundeswehr and other nations."

On the other hand Bernd Siebert, defence spokesman for the ruling Christian Democrats has asked for an extra €2 billion on top of the budget to be spent on military equipment over the next two years.

He is backed by Dietrich, who has called for an "annual special programme fund, which is not part of the defence budget" worth €2 billion "carefully controlled by the parliament", enabling the Bundeswehr to acquire, even on short notice, what they need for missions.

He says the Army needs more than "3,000 protected vehicles and a lot more Future Infantry Systems," just to give the Bundeswehr protection for its current commitments.

One immediate point emerges from this. Like in the US, defence procurement spending requires the specific approval of the elected representatives, which does ensure that there is debate on the proposals made by government.

This is quite unlike the UK where the Ministry of Defence has a global budget, voted annually as part of the government's general expenditure. Announcements are then made piecemeal by the Ministry, most often by way of a ministerial statement, with no debate and no specific parliamentary approval required. Decisions are examined after the event and any debates that follow can only deplore government actions, without being able to force changes.

If there was one reform in the UK which would substantially enhance MoD performance, it would be to make all defence procurement decisions subject to parliamentary approval.

But the central point here is the similarities here between the German Army situation and that of the British Army. Both have forces deployed in Afghanistan and both are starved of resources while the "big projects" get the funding, not least the Eurofighter. 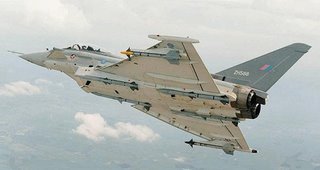 With 232 of these machines on order for the RAF, at £60 million each – with the bills only now coming in – we are saddled with a Cold War project which has little relevance to our current operational needs – as indeed even The Daily Telegraph recently observed.

Whatever the merits of the current machines, it must be remember that the multi-national project was originally conceived for wholly political reasons, as a means of fostering European defence integration via common defence industrial projects – on which basis it was enthusiastically endorsed by that rabid Europhile Michael Heseltine.

Had we then bought US F-16s – at a third of the cost of the Eurofighter – we would have been better served not only financially but operationally as, unlike the current Eurofighter version, these aircraft have a potent ground attack capability. Even now, the MoD is having to spend another £73 million on preliminary work to develop the Eurofighter for the ground attack role.

This is by no means the end of the expenditure as European-designed weapons for the Eurofighter are far more expensive than their US counterparts, all of which means that our forces are struggling to make ends meet, while money drains into the sand to fund the great European fantasy.

That is the legacy of Mr Heseltine and the malign effect of a failed experiment which, even now, is costing lives.