Neither strength nor unity

Is there anything the EU has ever done that can be considered, unambiguously, an unalloyed success?

Well, if you are to believe the hype, one such is the Asia-Europe Meeting, or ASEM to its friends, a "cooperation forum" for Asian and European countries. It was initiated in 1996 "to strengthen dialogue and interaction between the two regions" and to promote "concrete cooperation that aims at sustainable economic and social development".

Yet, via chron.com, Associated Press writer Robert Weilaard puts a different spin on it. Normally, AP is the most Europhile of all the press agencies, but Weillaard is definitely not of the Kathy Gannon mould.

Heading his piece, "Unhappy Birthday for EU-Asia Relations", he tells us that at a summit in Bangkok in 1996, European and Asian leaders pledged to boost economic, trade and political relations to offset America's disproportionate weight in global affairs. Today, he adds, both sides agree that has failed miserably.

Ahead of the 10th anniversary Europe-Asia summit, opening Sunday in Helsinki, thick policy papers detail how the relationship between the two continents has weakened even though the summit agenda buries this debacle under a welter of debating topics. 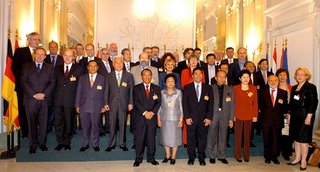 The 38 leaders of ASEM will over two days debate globalisation, security threats, energy, climate change, collapsed world trade talks, cultural dialogue and competitiveness. Through it all, they will seek to turn the Europe-Asia relationship into a more credible one, notably by issuing a declaration on climate change.

But, writes Weilaard, it all seems doomed to be an unhappy event for European and Asian nations that have failed to make their relationship reflect the reality that collectively they account for 40 percent of the world population, 50 percent of its economic output, and 60 percent of global trade.

He cites Dato Mohammed Jawhar Hassan, deputy head of Malaysia's Institute of Strategic and International Studies who has written a report to the summit. "After 10 years (the Europe-Asia relationship) is still grappling with the idea of what it is going to become," he says,

The inability of the 25-nation EU and its partners - China, Japan, South Korea, Brunei, Cambodia, Indonesia, Laos, Malaysia, Myanmar, Philippines, Singapore, Thailand and Vietnam - to develop a coherent partnership has left the United States as the dominant economic, political and security partner for many Asian countries.

Further damnation of the venture comes from a joint study of the University of Helsinki and the Japan Center for International Exchange. It says that Europe's political and economic dialogue with Asia has degenerated into a talk shop lacking "substantive cooperation", adding, "and there seems to be no overall consensus on how to change the relationship”.

But Europe's trade with Southeast Asia - which comprise the majority of Asia's ASEM members - has been stagnant. Over the past 10 years, Southeast Asia's share of all EU exports fell by 1.2 percent, and European investment in the region has declined.

The political side of the EU-Asia relationship is also a struggle. The Europeans want Asian governments - notably in China and Southeast Asia - to do more to protect human rights. The Asians say the issue has no place in economic and trade discussions, and are internal matters governed by national culture and history.

There is also much agonising over who should be in ASEM. The EU argues each time it admits new members - as it did in 2004 when Cyprus, Malta and eight East European nations joined - they must automatically join the Asia-Europe partnership. Ever wary of the need for balance, Asians fear this automatic ASEM membership gives Europeans too big a say.

Over European objections, they have brought in Myanmar, Cambodia and Vietnam, but not Pakistan and India - two rising economic powers judged too large, especially by Malaysia and Singapore. 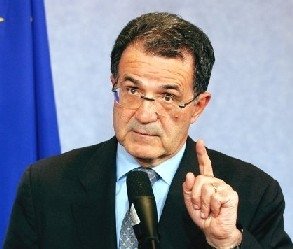 "For us," he said, "dialogue with our Asian partners has become an integral part of our normal agenda: it is not triggered by euphoria when the economy is going well or sparked by pessimism in times of crisis. It is simply the result of the Commission's new Asia Strategy - what we call Enhanced Partnerships."

"One of the strengths of the ASEM process," he added, "is engaging peoples of various cultures, civilisations, religions and experience, at different stages of development, in order to draw unity and strength from diversity."

By their speeches shall they be judged. Four years on, there is certainly diversity – but there is neither strength nor unity. In fact, with perhaps millions of air miles expended on seeking "dialogue and interaction", the EU is no further forward than when it started ten years ago.

But then, in the affairs of the EU, what else is new?