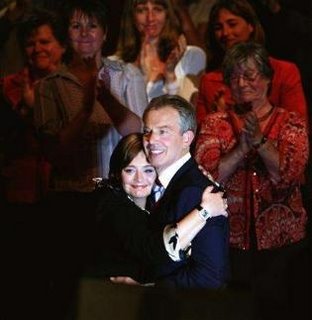 So say, currently, 1309 articles posted on Google News, mute testimony to the media obsession with the Labour leadership – an opportunity to indulge in the mindless pap that has poisoned intelligent political discourse and saved legions of idle hacks from doing anything strenuous like reporting news.

Anyhow, by common consent, Tony Blair's speech to the conference yesterday was his "farewell" – but not to the country… that really would be a cause for celebration. Unfortunately, this is only billed as the farewell to the Labour Party. Our "Tone" still has another nine months or so in office, more than sufficient to complete the destruction of our nation that started with his accession in May 1997.

Needless to say, his speech was greeted with "euphoria" among the Labour faithful – something we will have to take the hacks' word for. Television and radio news has been banned from the EU Referendum household as the sight of TB posturing and prancing was more than even strong stomachs could bear. Watching a fourth re-run of a Star Trek Voyager episode on Sky 1, showing flesh harvesting mutants, was infinitely preferable.

A number of hacks – always ready with the empty cliché – write that his will be a tough act to follow, which is undoubtedly true. When most of the nation is already wrecked, it will be exceedingly difficult to do as much damage as this man has done, although Gordon Brown – if it is he that follows – will undoubtedly try his best.

"Love him or loathe him, it was a leader's speech," said Tony Woodley, general Secretary of the Transport and General Workers' Union, and indeed it was – although even Lemmings, presumably, have leaders.

The only thing more depressing is that after this love-fest of the morons, next week we have another, as the Boy King addresses his faithful – what's left of them – in the south coast seaside town of Bournemouth. Mercifully, from the perspective here in the frozen north, in Yorkshire, it would be difficult for him to be further away and still be in England – and the off-switch on the television is still functional.

Possibly though, there is something more depressing. When we finally do get rid of Blair, his successor may be so awful that he makes Boy King Cameroon look attractive. That is probably the only thing that would get him elected and the thought of that plump, smug, vacuous face leering from the television, being addressed as "prime minister", is something we do not even want to begin contemplating.

Should that happen – and in any event – the second draft of history will be written and Tony Blair – who's name coincidentally and appropriately shares initials with a malignant disease which his government has singularly failed to check – will re-emerge as the great statesman.

It will take several generations before historians are able to write a more accurate account of his reign, recording just how damaging this man has been - but the truth usually comes out in the end. That, at least, is of some comfort.