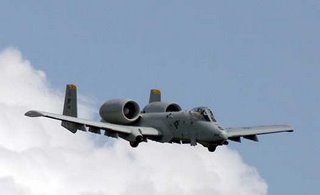 It is extremely difficult to know exactly what to make of the "leaked" emails from a British Army Major, widely reported in the MSM (for instance, here, here and here) as complaining, amongst other things, that RAF pilots there are "utterly, utterly useless".

In one of the published extracts of the emails, the Major is reported to have claimed:

Twice I have had Harriers in support when c/s on the ground have been in heavy contact, on one occasion trying to break clean. A female harrier pilot 'couldn't identify the target', fired 2 phosphorous rockets that just missed our own compound so that we thought they were incoming RPGs (rocket-propelled grenades), and then strafed our perimeter missing the enemy by 200 metres.

Nevertheless, the Major does write: "the US air force had been fantastic", to which he adds, "I would take an A-10 over Eurofighter any day." Cue picture of A-10 (above).

Much else of what the Major does say – about the shortage of troops and how hard-pressed they are – checks out with other information, not least the comments of Captain Leo Docherty, reported in The Times earlier this month.

There is now too much "smoke" to suggest that there is no "fire", despite the bland denials of the MoD. We will, therefore, have a more detailed look at the Afghan situation later today.