Is this an apology? 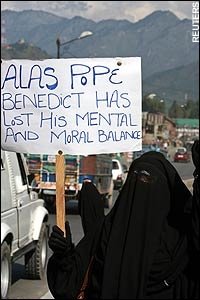 There seems to be an enormous amount of hot air being generated over the Pope’s lecture in Regensburg and the subsequent statement from the Vatican. Of course we saw all the usual demonstrations, effigy-burnings, threats to the Holy Father, demands for an apology, comparisons with Hitler and Mussolini (by a Turkish politician who did not precisely explain the basis of the comparison) and other suchlike charming displays of desire for peaceful dialogue.

Shamefully but not surprisingly the MSM joined in on the wrong side, chattering idiotically about the Pope’s lack of diplomacy or of media savvy. It did not seem to occur to any of these benighted journalists or the unnamed diplomatic sources that the ability to appeal to the so-called liberal media may not be high on the Pontiff’s list of priorities. Speaking the truth and calling for a revival of spiritual values, on the other hand, seem to be quite important to him.

Among other matters, he is insisting that a

“dialogue between Christians and Muslims "cannot be reduced to an optional extra," adding: "The lessons of the past must help us to avoid repeating the same mistakes. We must seek paths of reconciliation and learn to live with respect for each other's identity."”

And, of course, there can be only one response to this and to suggestions that some Islamists prefer to impose their ideas, if they can be called that, by violence: violent street demonstrations. You know the kind of language bullies use: “Don’t you dare to call me a bully or I shall beat the living daylights out of you.”

The question is, however, did the Pope apologize. I am not so sure. The Vatican statement insists that his words cannot be changed, though he holds to the view that Islam is to be respected as a religion of the Book and one that is, in many of its tenets, close to Christianity.

The ridiculous accusation that the quotation from Manuel II Paleologus somehow represents Benedict XVI’s own view is dismissed. Then comes the crucial paragraph:

“The Holy Father thus sincerely regrets that certain passages of his address could have sounded offensive to the sensitivities of the Muslim faithful, and should have been interpreted in a manner that in no way corresponds to his intentions. Indeed it was he who, before the religious fervor of Muslim believers, warned secularized Western culture to guard against "the contempt for God and the cynicism that considers mockery of the sacred to be an exercise of freedom."

In reiterating his respect and esteem for those who profess Islam, he hopes they will be helped to understand the correct meaning of his words so that, quickly surmounting this present uneasy moment, witness to the "Creator of heaven and earth, Who has spoken to men" may be reinforced, and collaboration may intensify "to promote together for the benefit of all mankind social justice and moral welfare, as well as peace and freedom" (Nostra Aetate no. 3).”

The Pope has, indeed, spoken of the dangers Western culture faces at the moment as it is his task to do. If only the Archbishop of Canterbury, head of another large international church, would make pronouncements of that kind instead of rabbiting on about “The Da Vinci Code” or, in more light-hearted moments, the war in Iraq.

But the famous “apology” places the onus on the Muslim faithful who are called upon to think a little more carefully about what the Pope has said. Those he did not read his speech, have obviously not bothered to read the full Vatican statement either.